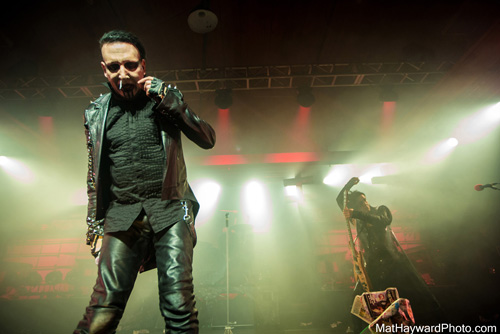 Like a Manson show, this write-up and photo slideshow is not for the faint of heart or stomach, so consider yourself warned. Anyone who knows anything about Marilyn Manson  is well aware that his art is disturbing, provocative, and crosses taste barriers. (Ya think?) It’s part of his act and one of the reasons why he has a large and rabid fan base.

Manson is more of a performance artist than musician with complex chops. He is not everyone’s cup of tea, especially when it’s spiked with arsenic. Typically, there would be a short write-up about the show to go with the stunning photos, but that’s not the story here. Something nefarious took place in Seattle Tuesday night (2/12) at The Showbox Sodo. It was even worse than vomiting all over the stage, which he did last Friday in Calgary, Alberta, because of a nasty bout with the flu.

Manson has a notorious reputation for spitting into the crowd and even grabbing photographers’ lens hoods and tossing them. Some find his antics revolting and appealing at the same time. It’s part of the Marilyn Manson brand, and it’s a formula that worked very well for Alice Cooper and David Bowie earlier in his career. (Both artists have has a huge influence on Manson.)

Without warning, Manson blew a giant wad of snot out of his nose, grabbed it, and threw it in Mat’s mouth. Mat is one of the finest photographers I’ve seen, and we’re fortunate to have him contribute here – not to mention the fact that he’s one of the nicest guys to share a photo pit with. It’s a bummer that he was the recipient of this kind of abuse for the sake of art. Dude, if you want to chop heads off of baby dolls (Oh yeah, Alice Cooper did that in ’74) or spit blood (That’s right, Gene Simmons did that in ’75) or bite heads off of bats (Ozzie), fine, but SNOTTING on a PHOTOGRAPHER as part of your shtick, is seriously not cool. Really, Marilyn? What the hell did a photographer ever do to you except help you sell a bunch of stuff? 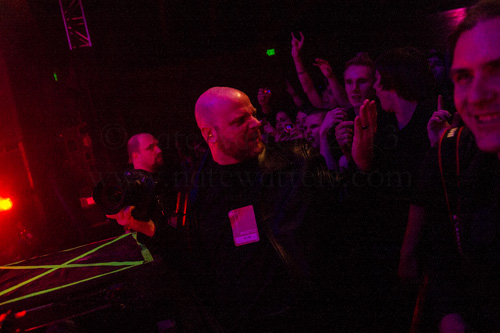 Being the trooper and consummate professional that he is, Mat sucked it up (no pun intended), shook it off, stayed in the game, and got some amazing snots. Doh! I mean shots! Afterward, he went home, took a long hot shower, washed his face three times, ran his electric toothbrush on a ten minute cycle, and went to work editing photos.

Bodily fluids aside, Manson, touring on his eighth record aptly titled Born Villain, put on a high-energy arena-type show in a 1800 capacity club setting, giving his fans everything they’ve come to expect.

For future reference, anything can and does happen at Manson shows… so maybe a pack a set of safety googles, rain poncho, hand sanitizer, and/or 100 proof liquor (for sterilization purposes) next time around.

Below, for your viewing pleasure, amusement, or disgust (I guess), described by a friend as “ewww and awesome,” is a photo slideshow from Tuesday night’s spit fest. I mean, concert. But don’t look too long – you may need an exorcism. Or at least a hot shower while you scrub your eyeballs with bleach.

Come to think of it, I need to jump in the shower right now. Suddenly, I feel really cheap and dirty.

As always, thanks for the stellar photos, Mat. You get a lifetime supply of soap, towels, and Listerine for your efforts! 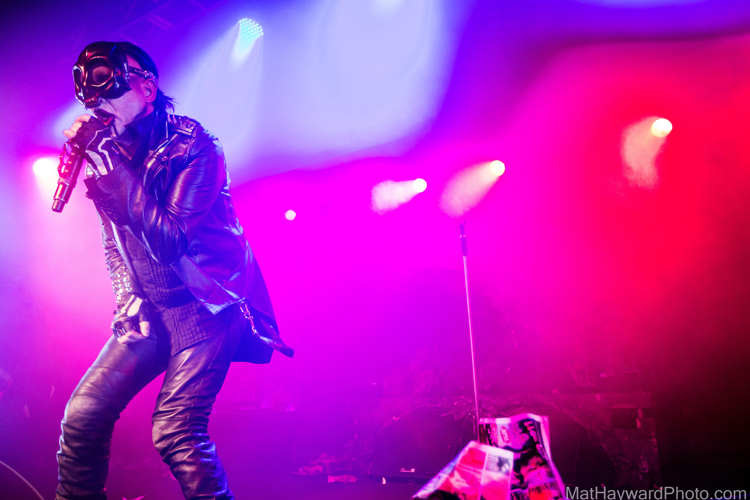 Checkout Mat’s interview on 107.7 The end below and read more about his experience here.

Not only is he a multi-media journalist, he is also an accomplished musician. He is the founder of SMI and drives the creative look, feel and branding for the publication. His years of writing, arranging, and performing live music in a variety of genres inform his ability to communicate the message and the mechanics of music. Roth’s work on SMI reflects his philosophy that music is the universal language, and builds community. He believes it has the power to unite people of every race, religion, gender, and persuasion.
Related ItemsMarilyn MansonMat HaywardSeattle Live MusicSeattle Music HappeningsShowbox Sodo
← Previous Story Ben Folds Five at Showbox @ The Market: A look back in photos…
Next Story → SMI Radio Ep. 83 On Demand: Ivan & Alyosha (Photos)