By Christine Mitchell on December 8, 2013@Housetornado37 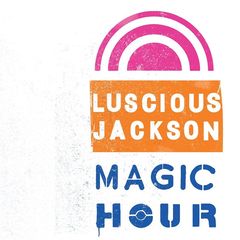 Luscious Jackson’s sixth release and fourth full album Magic Hour (self-released on the band’s own City Song label) is a continuation of what you know and love about the music that Jill, Gabby, and Kate have been making for going on twenty years. Theirs is a unique sort of tuneage that plants you squarely on a scummy brownstone stoop in the Five Boroughs on a hot, humid summer day, watching the little kids play in the fire hydrant spray and the big kids play on the basketball court across the street. It’s a funky hip-hop disco-rock hybrid with acoustic guitars and crisp drumming that sounds fresh and optimistic and makes you want to dance.

Luscious Jackson disbanded ten years ago in order to spend time with their families, but Magic Hour sounds as if the intervening years never existed. In fact, the sound is stripped down quite a bit from the lush sonic landscape of their previous album, Electric Honey, and sounds a lot more like their debut EP In Search of Manny in several parts of the record. On tracks like ‘You and Me’, ‘Show Us What You Got’, and ‘Frequency’, old-skool Luscious Jackson shines through like a disco ball at a roller derby. ‘#1 Bum’ is a goofy, fun tribute to the masculine derriere (Gabby Glaser’s deadpan, sexy delivery here is perfect- “You are my male J-Lo”-what a kicker!). ‘We Go Back’ takes a more serious turn in memory of the band’s close friend, Adam Yauch of the Beastie Boys, and Adam Horovitz, himself a Beastie, produces the excellent, multi-layered ‘So Rock On’. Jill Cunniff’s voice is as beautiful as ever, and Kate Schellenbach’s drumming is clear, succinct, and instantly recognizable as her own. Former bandmate Vivian Trimble’s usual keyboard contributions are missing here, but the band does a good job of making do without her (she chose not to take part in the reunion).

The creation of Magic Hour was completely funded through a PledgeMusic campaign, which allowed the band creative control and avoids a record deal and the heavy touring that would most likely accompany such a deal. It appears that this approach suits Luscious Jackson very well. Magic Hour plays out very magical, indeed.

Christine Mitchell has been poring over album liner notes pretty much since she acquired the skill of reading, and figured out the basic structure of rock songs at an early age. Whether it’s the needle popping into the first groove of the record, the beeps that signal the beginning (or end) of a cassette tape, or digital numbers ticking off the seconds from zero, music brings Christine happiness, ponderous thought, opportunities for almost scientific study, and sometimes a few tears. When she started attending live shows two decades ago, a whole new piece of the puzzle clicked in and she has been hooked ever since.
Related ItemsArlene BrownLuscious JacksonNew Music PreviewNews
← Previous Story Black Joe Lewis delivers a knockout at the Neptune (Photos)
Next Story → Live Review: A look back on 107.7 The End’s ‘Deck The Hall Ball’ (Photos)