By Christine Mitchell on February 20, 2014@Housetornado37 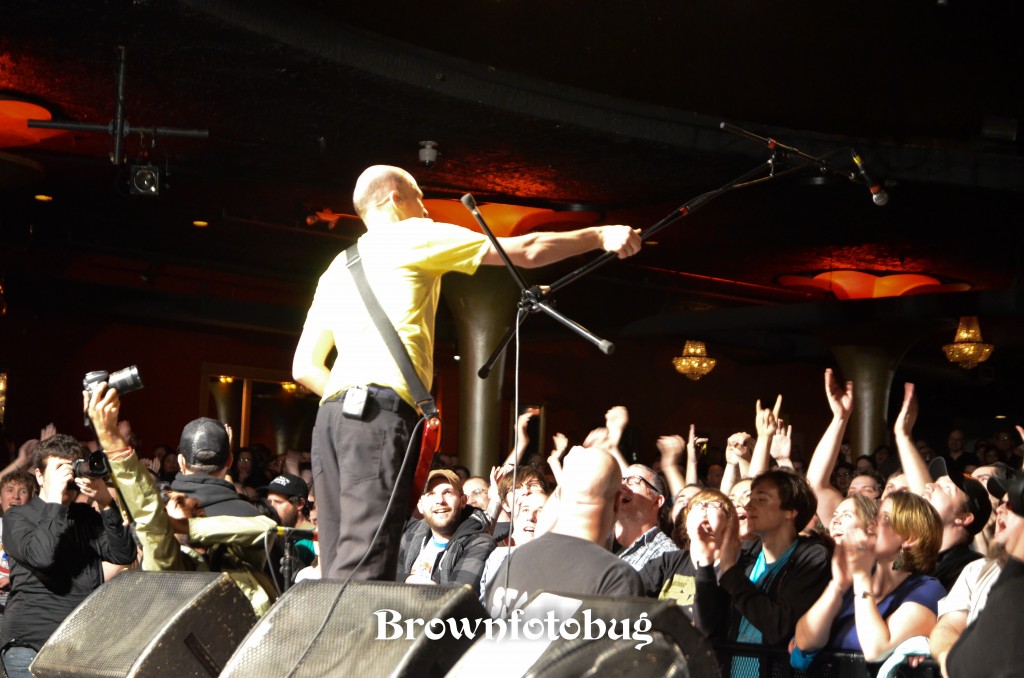 Chris Ballew of The PUSA (Photo by Arlene Brown)

Fans of The Presidents of the United States of America (PUSA) are super, super friendly. Chatty, happy, and they seem to take regular “smoke breaks.” This glum girl is becoming more and more appreciative of these types. Yes, because otherwise I would probably mope. And as a moper, I was rather surprised I wasn’t over in Ballard with Mudhoney (which made me a little mopey), but as PUSAfest 2014 got underway at The Showbox, it was hard to stay down in the dumps.

Motopony did a great job of revving things up with melodic rock that sounded just a bit old school. Lead singer Daniel Blue provoked a lot of conversation with his cropped, cowl-hooded jacket. I heard people from the crowd saying everything from “Cool shirt!” to “Is that a woman’s jacket?” The song “Molly” reminded me a little bit of Alt-J’s “Matilda,” but I liked this one a lot better.  It was right around this time that Mr. Blue picked up a smoke machine and it began going crazy. . . everywhere. Blue pointed it at the guitarist, the bassist, the keyboardist, and ultimately the crowd. At times it was a bit disconcerting because it looked as though the band had been lost in a cloud, but as the fog dissipated it created lovely atmospheric effects combined with the lighting. Motopony rocked it out; they were earnest and hardworking and obviously had it together as tambourines expertly flew across the stage.

You Scream I Scream were a total hoot. With a psychedelic-sound reminiscent of The Cars and a stage presence that recalled the older, goofier Seattle-band days, Floyd, Jake, and Audrey played a fun, intense set. Jake, the keyboardist, reminded me of Mr. Bean wearing a disco-ball motorcycle helmet, and his playing made the keys sound like a second guitar at times. It was really refreshing to hear, new to my ears. Audrey is a damned good drummer. The crowd consensus was overwhelmingly positive. After a mini-jam session and some “slow-dancing,” it was time for PUSA, but not before the masses roared their approval of You Scream, I Scream.

The Presidents of the United States of America took the stage to the strains of ‘Chariots of Fire’, Chris Ballew doing a little slow-dance of his own. The set began with a cover of MC5’s “Kick Out the Jams” and a tangling of cords between Ballew and guitbassist Andrew McKeag that was pretty silly. If you don’t listen to music, perhaps you don’t know about PUSA’s joy-punk sound; perhaps you aren’t familiar with their goofy songs about kitties and peaches and dumb girls, classic cars, and nurses. Everyone at The Showbox was well-schooled, however, and knew every lyric by heart and exactly when it was appropriate to pogo. Everyone in the room was there to party, and PUSA was pleased to deliver. By the way, does drummer Jason Finn look a tiny bit like Robert Smith? The band sounded great, which is no surprise.

Anyway, The Presidents’ new songs (from their PledgeMusic-funded, newly-released “Kudos to You!”) fit in smoothly with the rest of their set, the one weirdo song being the country-punk “Poor Little Me.” Other newbies like “Crown Victoria” and “She’s a Nurse” sounded great alongside the classics: “Kitty,” “Lump,” and good ol’ “Peaches” were all performed.  The Buggles’ “Video Killed the Radio Star” was rolled out during the encore. A reprise of “Kick Out the Jams” rounded out the night. Kudos to The Presidents for another great PUSAfest. 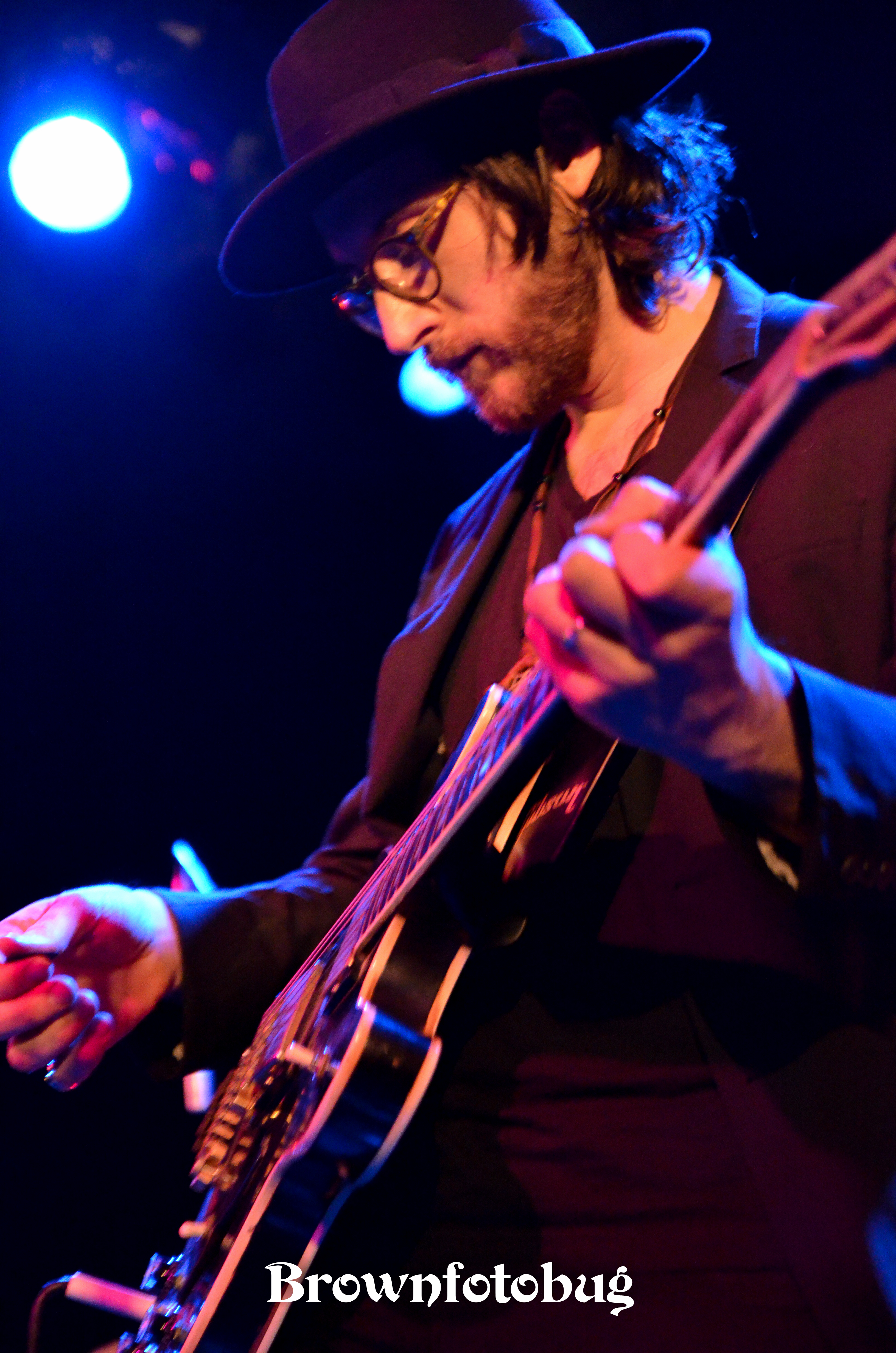 Christine Mitchell has been poring over album liner notes pretty much since she acquired the skill of reading, and figured out the basic structure of rock songs at an early age. Whether it’s the needle popping into the first groove of the record, the beeps that signal the beginning (or end) of a cassette tape, or digital numbers ticking off the seconds from zero, music brings Christine happiness, ponderous thought, opportunities for almost scientific study, and sometimes a few tears. When she started attending live shows two decades ago, a whole new piece of the puzzle clicked in and she has been hooked ever since.
Related ItemsArlene BrownChristine MitchellMotoponyPUSAfestSeattle Music HappeningsShowbox at the MarketThe Presidents of the United States of AmericaYou Scream I Scream
← Previous Story Live Review: Mudhoney Slays at Tractor Tavern’s 20th Anniversary Bash
Next Story → Pixies shake some skulls at The Paramount (Photo Slideshow)