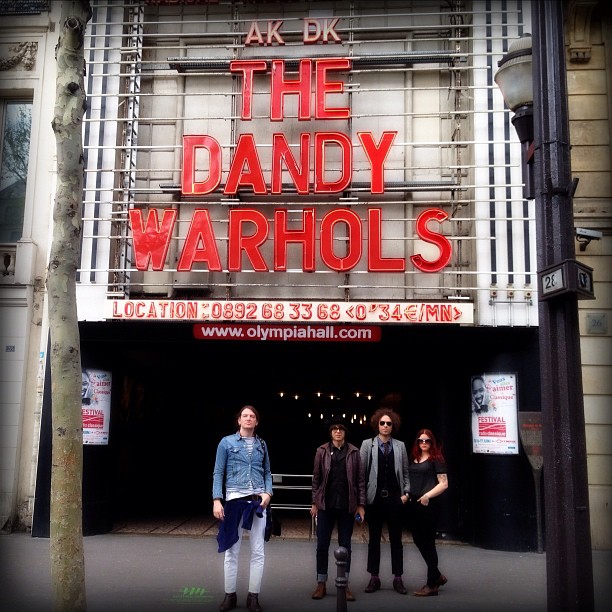 Special to SMI by Kevin Heiderich, with additional contributions from Jennifer Austin

The Dandy Warhols came home (kinda) Sunday night, June 17th. They played the last show of their hard-touring year in support of their new album, This Machine, at Seattle’s Showbox at the Market. The Portland, Oregon alt-psych rockers just finished a 36 show schedule that covered Europe and the US over 64 days – perfect for a culture-driven quartet who have fashioned themselves into art rock.

The Dandys seem to be acclimating well to the role of a seasoned, stable, long-term band. They put on a fantastic live performance, with wide range of souls gathering. Hipsters, grungers, families, and all different sorts turned out – as it should be, for a band with 18 years touring experience.

Rockers 1776 (from Longview, WA, but residing in Portland, OR) played the first set and lit up the stage. Sporting a retro look with fabulous hair, 1776 wove a series of great songs that ranged from 60s-esque early rock classics to full bore mid-70s metal – executed like serious professionals.

Lead singer/guitarist Nigel Ledgerwood sang, growled, and snarled while playing a very strong lead. Second guitarist Chris Cook also lit off a few blistering solos. Zach Whitton, the baby of the group at barely 21, dazzled by playing a right-handed bass upside down. (He’s a southpaw.) Drummer Mitch Ruppe pounded the skins in his BDU undershirt with ‘HASH’ stenciled on the front. This young group delivered a solid, satisfying set.

Sleepy Sun was next, and they seem just fine without original member and co-lead singer, Rachel Fannan. Brett Constantino led the psych onslaught with an almost whispered approach. The songs were expansive, diverse, and intense. They played a good mix of long psych-driven songs from their first album, Embrace, and latest effort, Spine Hits. Sleepy Sun is a band definitely worth going to see.

Finally, The Dandy Warhols hit the stage and the crowd (of course) went wild. They launched into a set packed with hits and new songs, playing a few crowd favorites right up front, such as ‘Not If You Were the Last Junky on Earth,’ ‘We Used To Be Friends,’ and ‘Last High.’ Mixed into the set were new tracks from This Machine, such as ‘Sad Vacation’ and ‘Autumn Carnival,’ which was co-written with David J of Love & Rockets. The set was very energetic and included a lot of banter about the road. Singer Courtney Taylor-Taylor remarked on the band’s longevity, and the fact they were approaching the anniversary of Zia’s first show with the band (third show in the band history), and logged 18 years as a unit. Also a topic of discussion was the first time they ever played The Showbox on the 1996 Love & Rockets tour, when they were the openers. Evidently, an equipment malfunction caused Taylor-Taylor to be shocked so badly he collapsed to the floor in the opening number.  Fortunately, there were no technical glitches in this show – just solid power alt- psych rock. Trippy.

Used To Be Friends

Not if You Were the Last Junkie on Earth

You Come in (Burned)

Not only is he a multi-media journalist, he is also an accomplished musician. He is the founder of SMI and drives the creative look, feel and branding for the publication. His years of writing, arranging, and performing live music in a variety of genres inform his ability to communicate the message and the mechanics of music. Roth’s work on SMI reflects his philosophy that music is the universal language, and builds community. He believes it has the power to unite people of every race, religion, gender, and persuasion.
Related ItemsKevin HeinrichLive ReviewSeattle Music HappeningsThe Dandy WarholsThe Showbox at The Market
← Previous Story Mayhem Festival 2012 getting ready to rage White River Amphitheatre
Next Story → Music shines through clouds at Northwest LoveFest (Photo Slideshow)