By Arlene Brown on December 12, 2013@brownfotobug 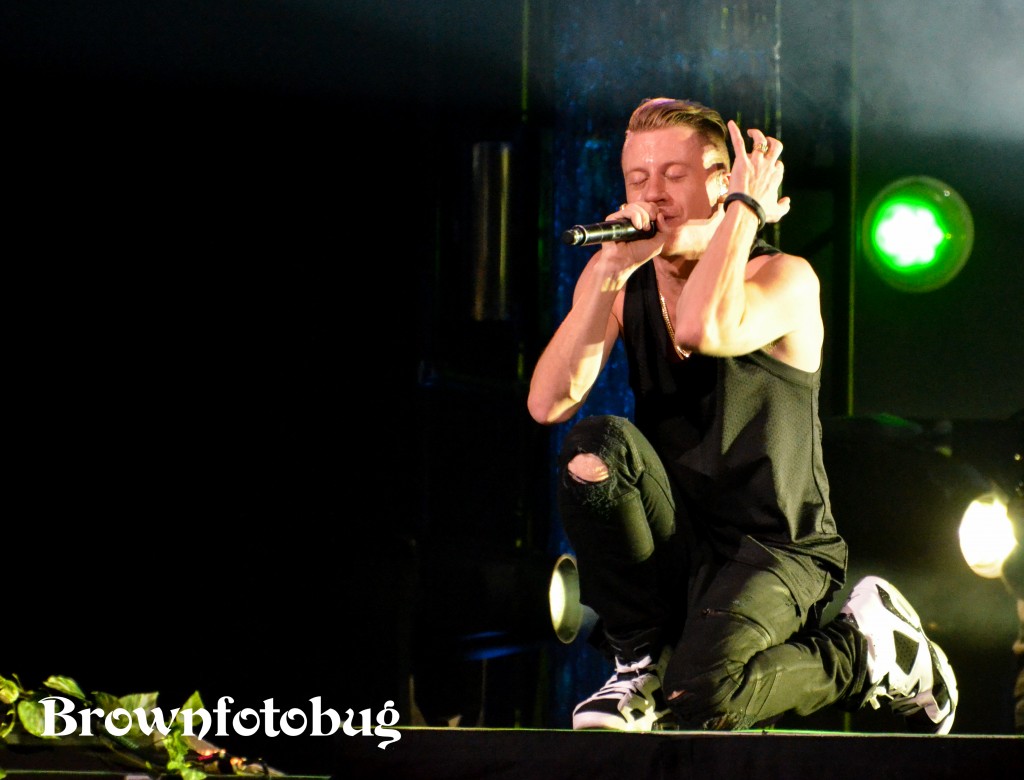 Apparently Macklemore & Ryan Lewis are kind of a big deal here in Seattle.  It’s not like his home town family, friends, and fans turned Key Arena into one big shark tank for one night.  On the contrary, they are doing it for 1-2-3 nights.

You can call him a sellout all you want.  Because, really?  He is.  He sold out ALL THREE dates at Key Arena.  There are not too many artists these days that are capable of that achievement. Good on ya! Luckily, I got to see the second night.  Tonight is final night of the Hip hop trilogy and conclusion of the fall tour that has taken Lewis and Macklemore across the globe. (A well deserved holiday break is definitely in order.) Tonight’s show (12/12) should offer even more in terms of excitement and surprises than the last two nights put together, that is if some of the inside buzz overheard last night is any indication.

As excited as I was to see the enormously huge Macklemore show, I was even more excited to see Sir Mix-A-Lot.  Yeah, I said it.  He’s been one of my absolute favorite performers ever, but last night was my first “official” time ever seeing him live and on stage.  So, to say was a bit giddy when he came on stage would be a slight understatement.  He jacked up the crowd with hits like “Hooptie” and “Buckin’ My Horse.”  This native Seattleite truly loves his hometown and The Emerald City gave him the love him right back.

Granted, another native Seattleite was headlining.  And WOW!  You either love Macklemore & Ryan Lewis, or you don’t but you must respect them. They have toiled locally for several years and broke out in 2012, crafting one of the catchiest and well produced records (The Heist) in memory. The dynamic duo also produced some of the most clever and viral friendly videos over the course of the year.

SEATTLE STARS IN THE NEW MACKLEMORE AND RYAN LEWIS VIDEO

I’ve liked their songs for a while.  They have a great beat, you can dance to them and they have a positive message.  Macklemore & Lewis are fresh, original and bring a self-effacing humor to their performance.  I’ve had the opportunity to see some amazing live shows.  (Hello, I still can’t find my socks that Pearl Jam rocked off last week.)  So I was a little leery of how good this would be.

It may have been the fireworks.  Or the BRILLIANT stage set up, or the spraying of water into the crowd with water.  Or perhaps it was the bear in the middle of the stage. (That was pretty cool!) Or maybe it was all of the dancing and laughing on stage.  But I really think it was the gold sparkled jacket Macklemore was wearing that tipped the whole stage presence for me.  Plus, let’s be real girlfriend…he ain’t too hard on the eyes either. Seriously!  So, it wasn’t to hard a task to photograph this man (he gives great face), his stage mates, the lights – everything!

With hits like “Thrift Shop,” and “Can’t Hold Us” being played in his home town, the crowd came UNGLUED from beginning to the very loud and crazy end!!  Truly an incredible night of music.

So, needless to say,  I started out the night skeptical. But Grammy nominees and MTV Award winners Macklemore & Ryan Lewis and along with the likes of Andrew Joslyn & The Passenger String Quartet, Mary Lambert, Wanz and the rest of his traveling Hip hop circus definitely made me a believer.

You might not be a “rap” fan.  But you can’t deny that A Macklemore / Lewis event is an evening of great music, energy and good times. These cats love of what you do, they do it well and it obviously shows! The good folks that showed up to party at “The Key” with MackLewis would not beg to differ. 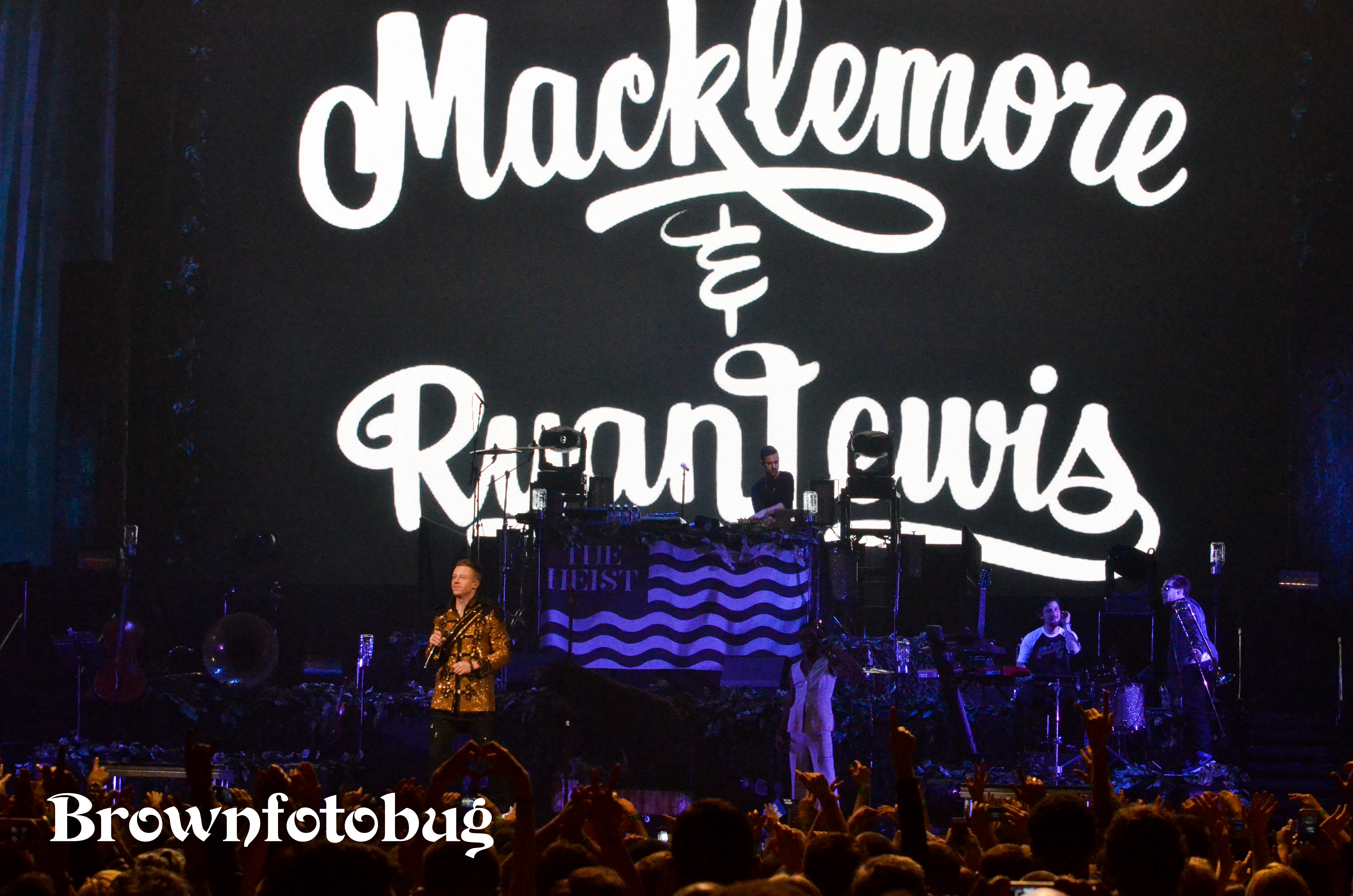 Arlene Brown is both a writer and photographer for SMI. She likes to take things one picture at a time. Covering and reviewing shows from Soundgarden, The Proclaimers, Lorde, The Head & The Heart, to Hank3, Bob Log III, New Politics, Black Joe Lewis, Grouplove, including local and national rising bands and more, she truly loves to try to get that perfect shot. Looking for that raw emotion, energy, power that only live music can deliver, she captures the essence of a show in her own unique style.
Related ItemsArlene BrownKey ArenaMacklemore & Ryan LewisRap. Hip HopSeattle Live MusicSeattle Music HappeningsSir Mix a LotXperience XP
← Previous Story Live Review: A look back on 107.7 The End’s ‘Deck The Hall Ball’ (Photos)
Next Story → SMI New Music Preview: Neil Young ‘Live at the Cellar Door’