Home / News / THE WHITE RABBIT: CLOSING OF A FREMONT LANDMARK

THE WHITE RABBIT: CLOSING OF A FREMONT LANDMARK 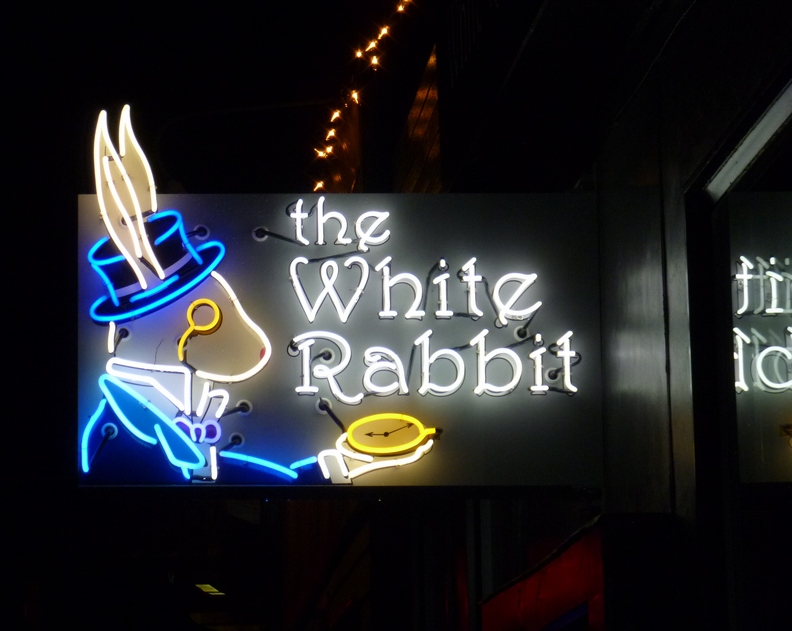 Just before the start of the new year, Fremont’s The White Rabbit closed its doors one last time. Having been a local landmark in one form or another since 2002, the Rabbit was home to regular acts such as Michael Shrieve’s Spellbinder and funk band Marmalade. News of it’s closing seemed to slide under the radar in the local Seattle scene, so I felt compelled to give it the proper eulogy it deserved. Sitting down with local booking agent and musician, Tim Basaraba (aka TBASA), we reflected on the legacy of the venue and the future of local music venues.

I feel like to play at the Rabbit was a rite of passage for upcoming Seattle bands. Can you name some of the notable bands that have played there?
I booked there all of 2013 and I would say having up-and-coming bands Ever So Android and Radio Raheem were a real treat. I predict you’ll be seeing these bands play larger venues like Neumos and the Showbox soon.

What were some of your favorite performances?
Ever So Android put on a great performance to a packed house back on August 17th and I was also extremely proud of the success we had with The Lady Bunch – an all-female singer songwriter showcase I put on in late September. But personally, my favorite show was one of my last there. It was a Sunday show called Acoustic Armageddon #5 featuring an all-star line-up that this city may never see again: Ian Forrester of Wildlife Indoors, The Spider Ferns, Peter Cameron, Patrick Galactic of Death By Stars, Wes Sp8, and TBASA. 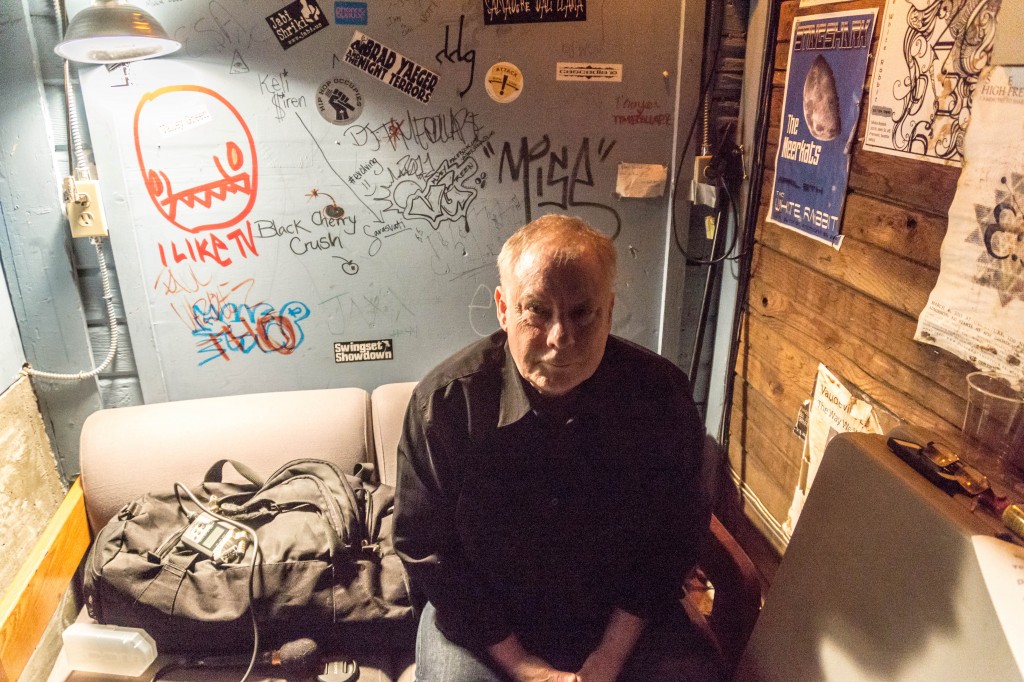 To have Michael Shrieve – picked by Rolling Stone as one of the Top 10 Drummers of All Time – as a regular guest is incredibly note-worthy. How did that relationship develop?
The Spellbinder nights were something I can’t take credit for. I assume Joe Doria and the White Rabbit’s owner put it together but yes, that was a real treat for fans and more importantly local musicians. Knowing they could see a Hall of Famer rock out every Monday at the Rabbit added real clout to the venue and neighborhood.

What’s the wildest story from your time at The White Rabbit?
On November 26th, one of my favorite local bands, Poverty Bay, was playing at the White Rabbit. I let in this older woman with a shaved head, despite her bringing two bags of groceries along. I’d said if she left the bags against the wall in the back, she could stay for the show. When Poverty Bay started playing, she began flailing her arms around and slamming into other people. After the second song, our sound guy Joe Cable asked me to try and step in. As I walked towards her, I noticed she was staring at the guy in the corner of the room while he pointed and laughed at her. She ran over, jumped on a chair in front of him and started kicking! I ran over, grabbing her around the waist and saying “Please be careful, I don’t want you to fall!” She struggled with me while her heckler continued taunting her. I told him to stop and led her towards the door while the band continued playing. I said that I thought she should go and she went for her groceries. I had turned around to check the ID of two new customers and out of the corner of my eye I saw her running back towards her taunter with a large bottle of bleach. She was fumbling with the cap as she ran towards him, but I cut her off and dragged her outside. “What were you going to do with that bleach?” I asked. “Give him a gift,” she replied as she took her bags and walked away. Poverty Bay never missed a beat through that entire fiasco.

The White Rabbit was always a mystery to me – the room has such a weird shape and I know there’s something odd about the actual construction materials of the building, yet having played there, the sound was some of the best I’ve heard in town. Can you elaborate on what you think made the Rabbit such a great venue?
Many rooms in the city are cavernous and, even when they’re packed with 75+ people, it sometimes feels like the sound doesn’t reach them. The Rabbit was a fine tuned machine and this was 100% due to Rob Sydow and his impeccable sound team. Whether it was Rob himself or any of his 3-5 regular sound guys, they all had an expansive knowledge of the room, the system and on top of that were great people. A venue can live or die with it’s sound and, while the Rabbit was going, I would say it was one of the best sounding rooms in town.

What was the dynamic between the White Rabbit and the High Dive, as they were so close? Did it affect business in any way? Even though it looked so much more like an actual music venue with a full stage, I always saw a better crowd in the Rabbit than next door.
Well first off, thanks for saying that. The day-to-day staff at the Dive were great – from the sound people we shared to the bar staff and door guys. I never really got along with their booker but that was more just a clash of styles then it was any actual animosity. My goal has always been to put together cohesive bills with like-minded people; people who care about their band and want to create events, not just another show. As far as its affect on business, I think by being a smaller room I was able to home grow talent that could fill the room, as opposed to trying to overreach with touring acts or cover bands like they would often do next door.

Can you give me the details surrounding the closing of The White Rabbit? When exactly is the venue closing and why?
The White Rabbit closed on December 31, 2013 – R.I.P. The owner had the Rabbit up for sale for some time and he finally found a buyer. The space will now be used for a taco bar that will not be hosting music.

What will you miss most about The White Rabbit?
Mostly I will miss the people. The sound and bar staffs were some of the best people I have ever worked with and the owner was very supportive of my shows, even when they seemed way out of left field. Over the last couple months, I also ran the door and I really miss just being out on the street and acting like a Carnival barker trying to get people in to see live local music. It was very fulfilling when I would get people who were just out for dinner or a stroll to come in and support local music. When they would leave the venue late at night with a CD from their new favorite band, it was always rewarding.

What are you plans now?
I am booking for The Mix in Georgetown. Fremont and Georgetown are completely different neighborhoods and, even though I have place in my heart for Georgetown, my goal is to bring my style of booking back to the center of the universe…the Fremont neighborhood of Seattle.

As a local booking agent, what are your thoughts on the rest of the Seattle scene? With another historic venue, the Comet, running into problems and shutting down a few months back, is there a common pattern here? Do you think the local scene is in trouble?
The business model of room fees and minimal promotion by the venue is broken. If I had a choice – or better yet the money – I would have a venue that had live local music 7 days a week and never have a cover charge. I would give the bands guaranteed pre-set pay outs and, if they failed to promote and/or overbook, I wouldn’t have them back. Just think of having a venue that you know is always free and the bands are getting paid – why wouldn’t you support that? There will always be a “Seattle” scene, but the new one that is bubbling up is not an incestuous, nepotistic, and genre-exclusionary animal like the scenes before it. This scene doesn’t need The Stranger or KEXP (though, they will eventually catch on), it just needs bands that are willing to make each show an event and to love and support the other groups they play with.

Ian is a contributing writer at SMI. He currently studies English at UW and is both drummer and manager for the local band The Mama Rags. Follow him on Twitter at @iancunn

Ian Cunningham is often described as either an old-soul or the most crotchety twenty-something you’ll ever meet (depending on the source), Ian holds a critical eye for modern music. Idolizing Keith Richards, Warren Zevon, and Lester Bangs, his musical preferences thrive decades prior to those of his peers. Raised in Portland, OR, he moved to Seattle in 2012 to continue drumming for the indie surf band Faire du Surf as well as to pursue an English degree from the University of Washington. Though the band has since dissolved, he is the current drummer and manager for The Mama Rags. In what little free time he has, Ian is a die-hard Seahawks fan and an avid record collector; his favorite album being Those Shocking Shaking Days. This October, he will be the proud father of a baby boy.
Related ItemsDeath by StarsEver So AndroidFremontHigh DiveIan CunninghamJoe DoriaMarmaladeMichael ShrievePeter CameronPoverty BayRadio RaheemSeattle Music HappeningsSpellbinderTBASAThe MixThe Spider FernsThe White RabbitTim BasarabaWes Sp8Wildlife Indoors
← Previous Story RockStar Motel reopens doors with sexy new look and feel (Podcast Interview)
Next Story → Kiss the Sky! Press Conference at EMP (Photo Slideshow)