By Christine Mitchell on August 16, 2015@Housetornado37 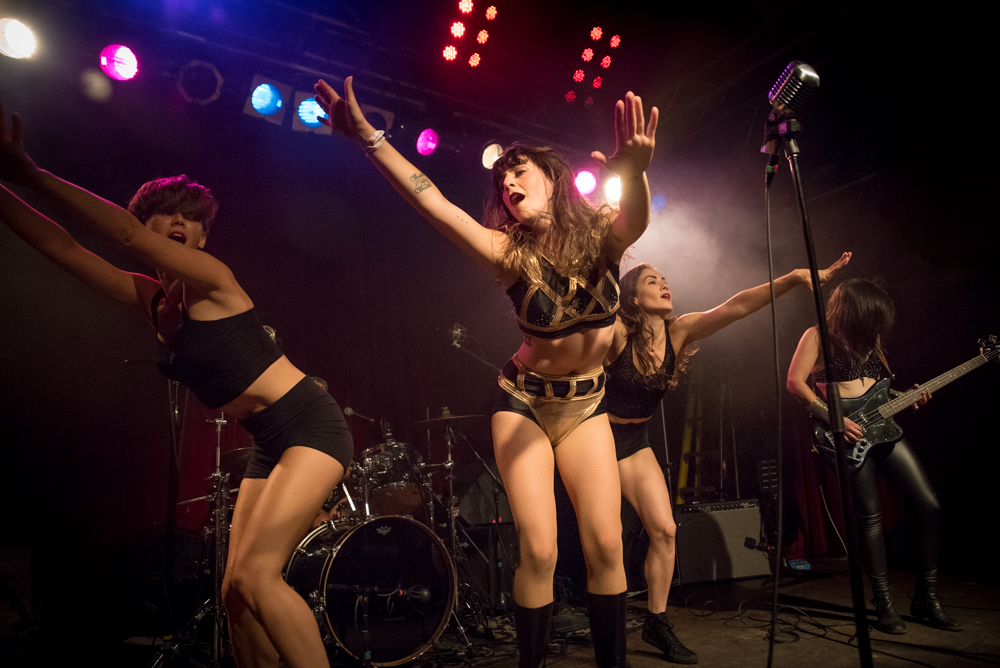 Life In Pictures is a new SMI column in which contributors document artists’ preparation on the day of a show. Our first installment features Thunderpussy. Contributor Christine Mitchell spent an afternoon and evening capturing the band’s preparation for their Capitol Hill Block Party performance.

It’s just before 4 p.m. on Friday, and I’m chatting with Whitney Petty of Thunderpussy on the front porch of the building where she and Molly Sides live. It’s an artist’s collective, and I can see paintbrushes in a jar through the open window of the entry level apartment. We’re chatting about how they aren’t like The Runaways, and because I am a terrible conversationalist I forget who I like to compare them to. I remember later, after the night is over. Whitney and Molly remind me of Aerosmith’s Toxic Twins when they get all up in each other’s business at a show, but when Whitney and Molly play Toxic Twins, it’s about ten times more arresting.

After chilling outside for a bit, we head up to the apartment via the basement, past a whole slew of bikes (“Just take one. No one will notice.”) Inside their sun-drenched apartment, Molly and two dancers (Emily Sferra and Danielle Hammer) are practicing dance routines for the show. It’s amazing to watch, and interesting to see them work out the choreography. It’s also tons of fun. 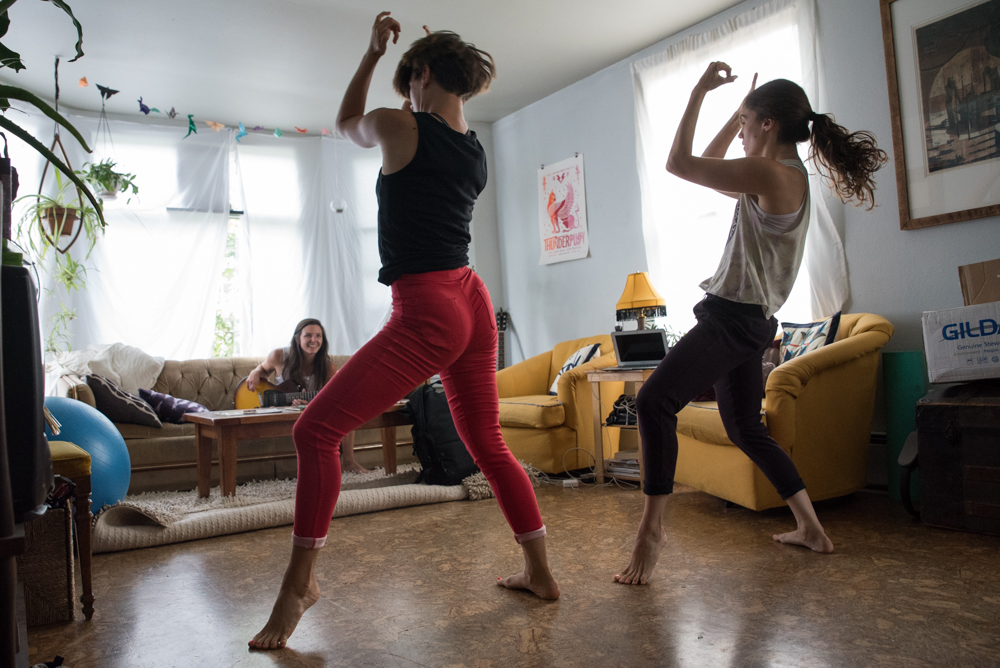 Dancers practicing for the show. (Photo by Christine Mitchell) 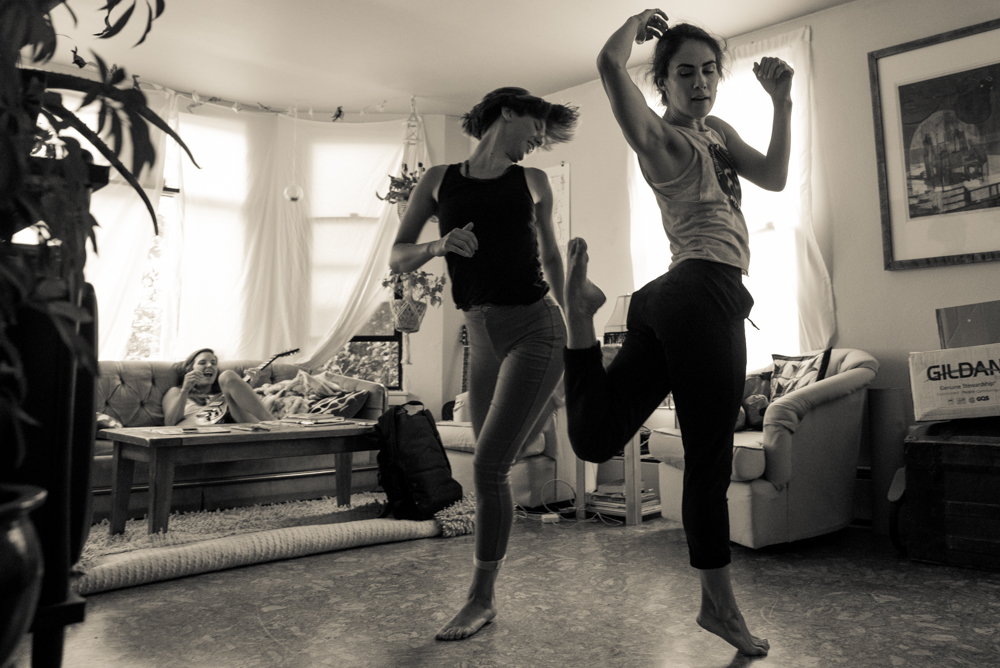 Dancers practicing for the show. (Photo by Christine Mitchell)

Soon it is time to head to the practice space to run down the setlist and work through a couple of new songs. We pile into the “Pussy Wagon,” a plush vintage van with seats that feel like couches. It’s all white and pinstripes on the outside, and red as a birth canal on the inside, including the curtains over the windows. Whitney and Molly love it. They drove it to Idaho. It’s awesome.

It’s a cushy ride over to Fremont. We meet bassist Leah Julius and drummer Lena Simon in the practice space, which is one in a warren of around twenty in a nondescript building. The practice space, like most of its kind, is tiny. I wedge myself behind the door with my ass against a tiny fridge. But a bunch of Rainiers are pulled from the fridge and passed around. With the door closed the space is hot and stuffy, and the cold beer is much appreciated.

The practice space is so hot that the overhead light is off and the room is lit with only Christmas lights. The equipment emits heat. The rock fills the room, melding with the sweat. It’s simply divine, sitting here on the floor experiencing this practice. They set a timer to make sure the set doesn’t go over or come out under time. They chug through the songs they know, the loudness crammed in with everything else. Their new songs are loosey-goosey, and come out more as a conversation, both musical and literal. They try out different transitions and riffs. For the new song “Make Me Moan,” Molly tries out different ways of singing the chorus and gets feedback from everyone else. 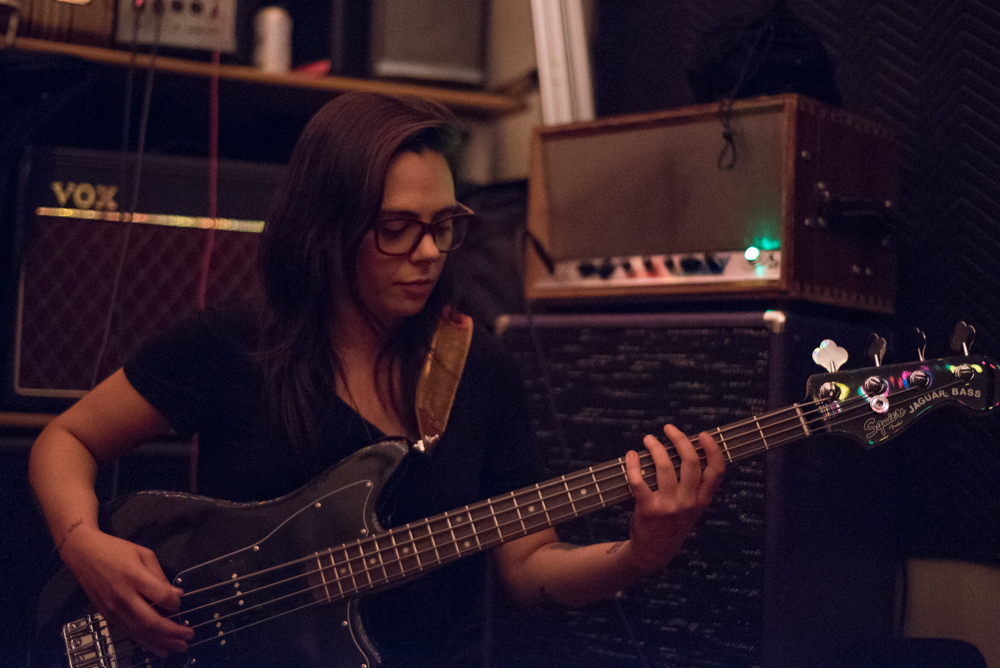 Leah in the practice space. (Photo by Christine Mitchell) 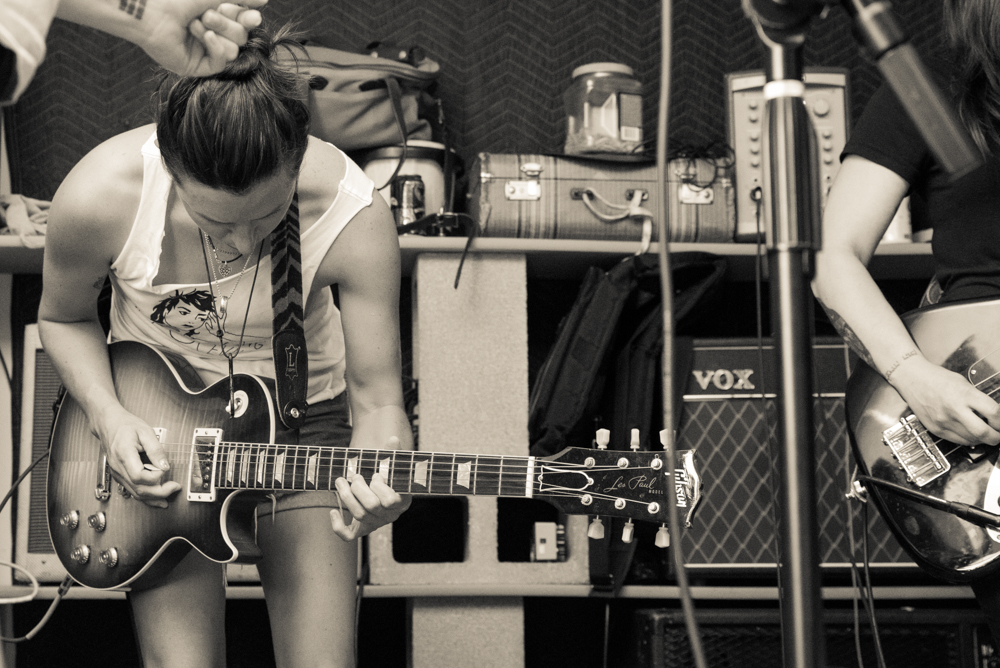 Whitney in the practice space. (Photo by Christine Mitchell) 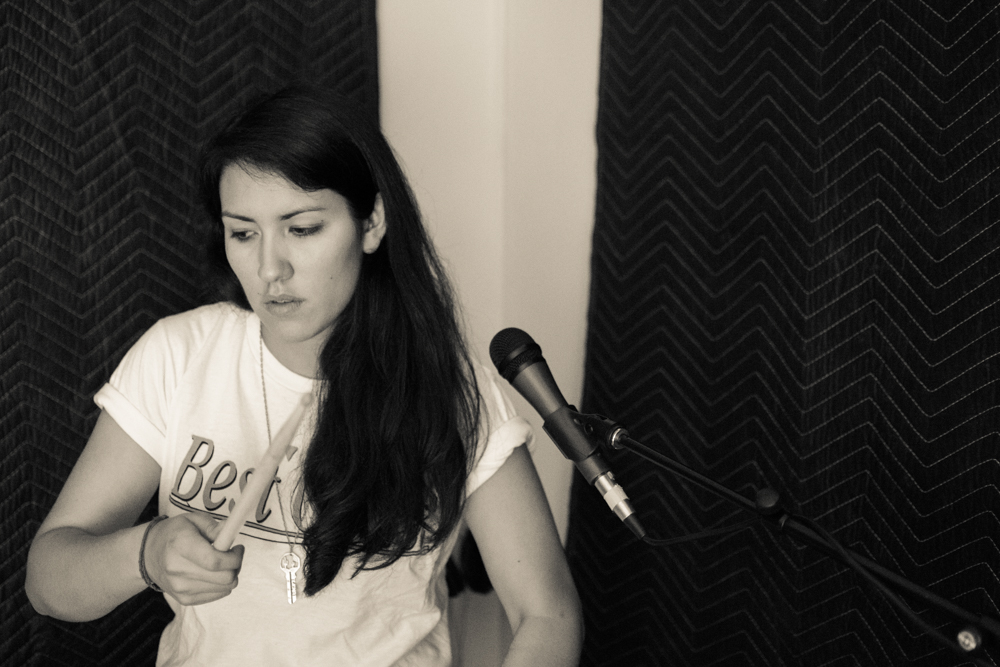 Lena in the practice space. (Photo by Christine Mitchell)

Molly in the practice space. (Photo by Christine Mitchell)

The band decides to take a break, and we all pile out of the stuffy room. Lena sits at the piano right outside the door, goofing around on the keys. Whitney, sensing a tender moment, breaks out the famous Thunderpussy whip and starts cracking it at Lena. She can’t keep a straight face. Lena’s seriously afraid of catching the end of the whip. Molly taunts Lena with Chinese stress balls, and everyone is laughing. 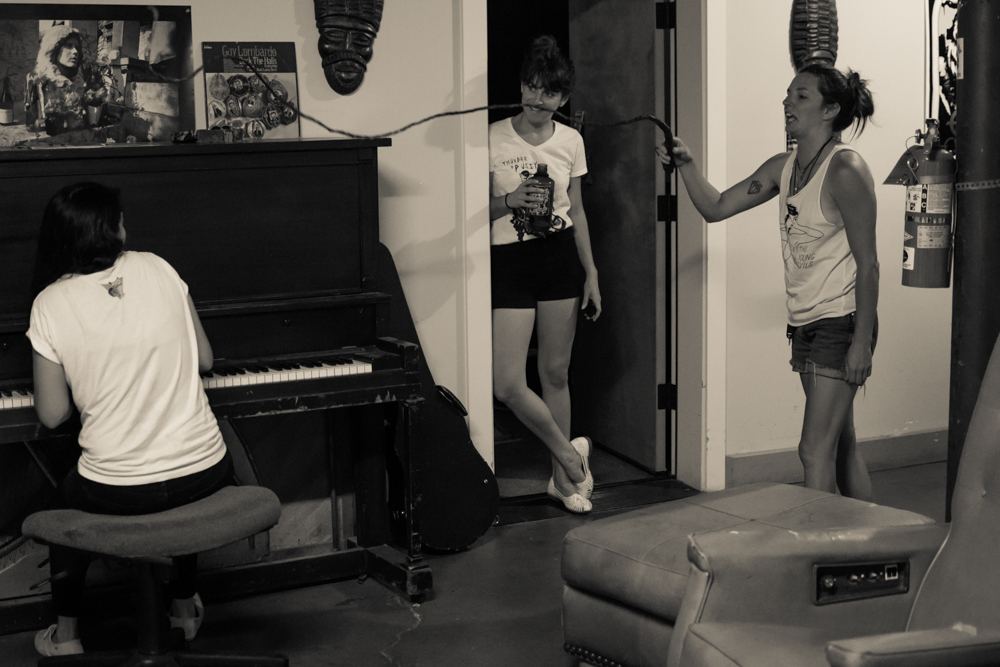 Outside the practice space. (Photo by Christine Mitchell)

The band heads back into the room to work a little more on the new songs. They’re excited to try them out at the show; the songs aren’t necessarily finished, but playing them live is a good gauge of their viability. Besides this, they will be recording that weekend with the legendary Jack Endino, which gives them another chance to hear and experience the new songs from another viewpoint. As unfinished as they are, to my ear the songs fit the Thunderpussy mold: bold and forward, loud and sexy. After this, it’s time to head back to the apartment. 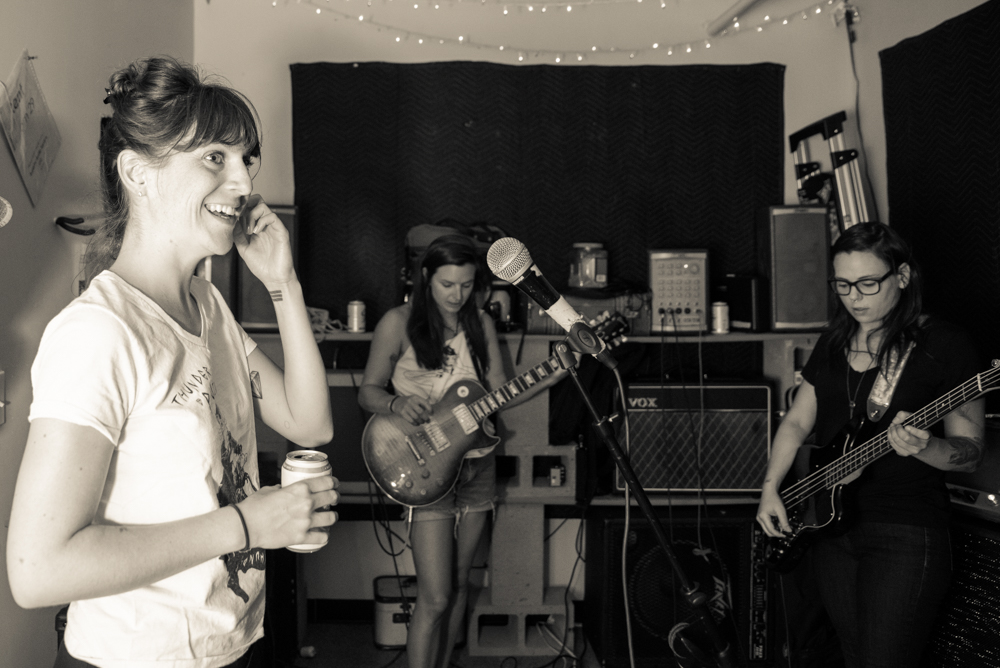 Thunderpussy in their practice space. (Photo by Christine Mitchell) 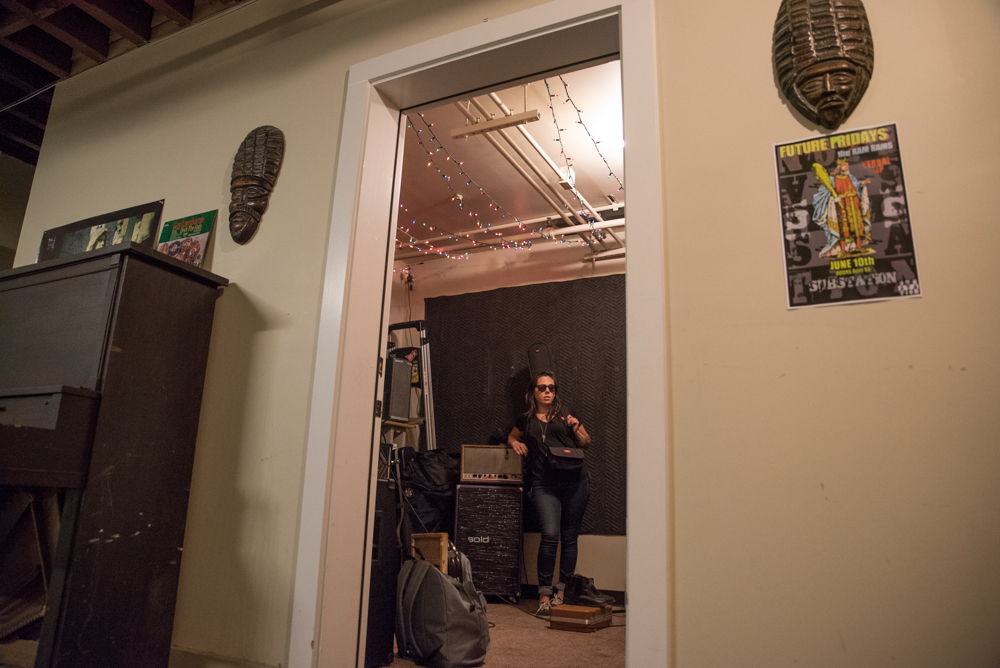 Leah is ready to go. (Photo by Christine Mitchell)

As we creep along back to Capitol Hill in rush hour traffic, listening to HOT 103.7 (“our station of choice” says Whitney) and Jay-Z’s “Big Pimpin’,” life is good. It’s sunny, Whitney proclaims more than one song to be “her jam,” and she and Molly are like an adorable old couple as they motor across the city, holding hands (if old people listened to HOT 103.7). We decide to order Thai food. 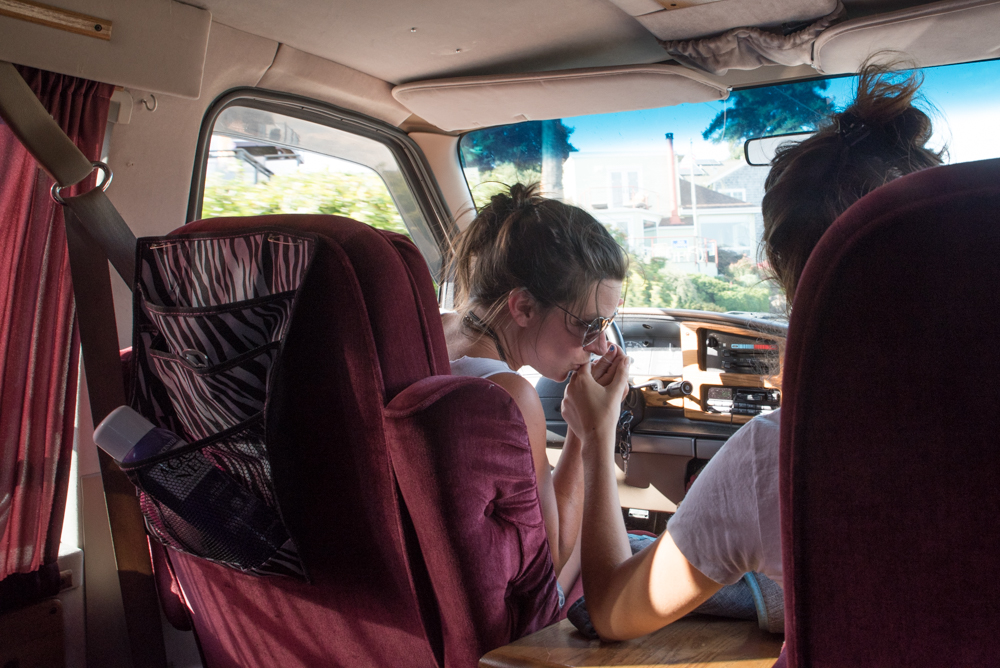 Driving in the van. (Photo by Christine Mitchell)

Lena meets us outside the apartment and everyone heads upstairs. Lena takes a nap in one of the bedrooms, and Molly begins an arduous hunt for a check she needs to get to a friend. Whitney needs to restring her guitar, which sets her on the track of routine maintenance of her vintage Les Paul. It’s obvious that she loves this guitar and that she loves playing guitar. All afternoon long she hasn’t been far from it, and time and time again I have watched her practice riff after riff after transition after riff. Now she lovingly switches out the strings, taking time to clean and polish the body and fretboard. 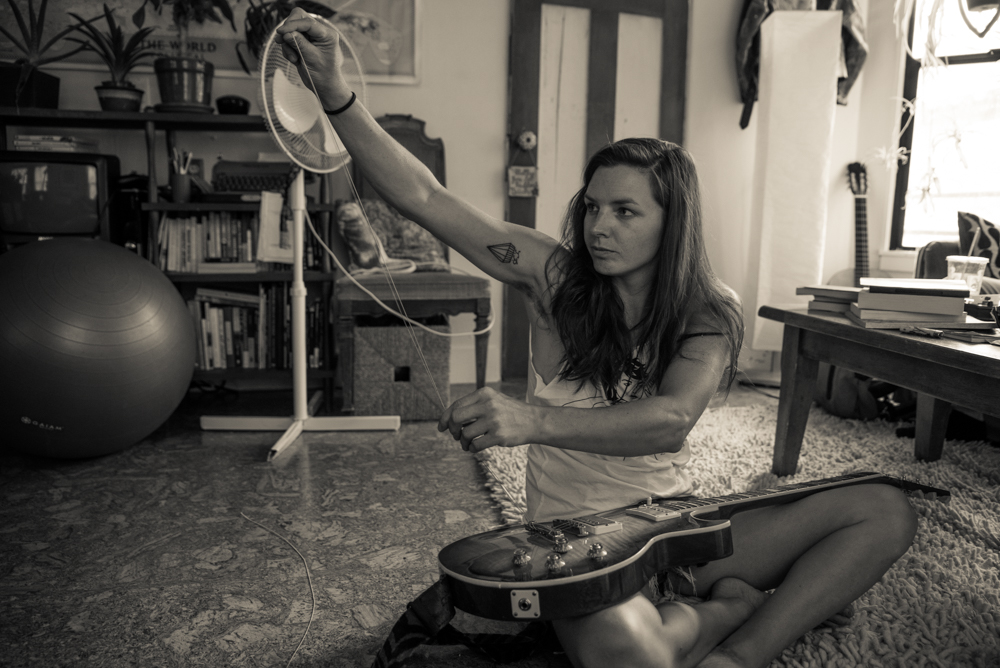 As she finishes her ritual, Lena seemingly perks up in the bedroom off of the living room and she and Whitney begin riffing about “tater toots” through the closed door. This goes on for some time. After everyone finishes the Thai food and the elusive check is finally found, Lena picks up an acoustic guitar and Whitney joins her as Molly writes in her notebook. Whitney teaches Lena a bit of Heart’s “Crazy On You” before she heads off to pick up the band’s costumes from designer Pakio Galore. 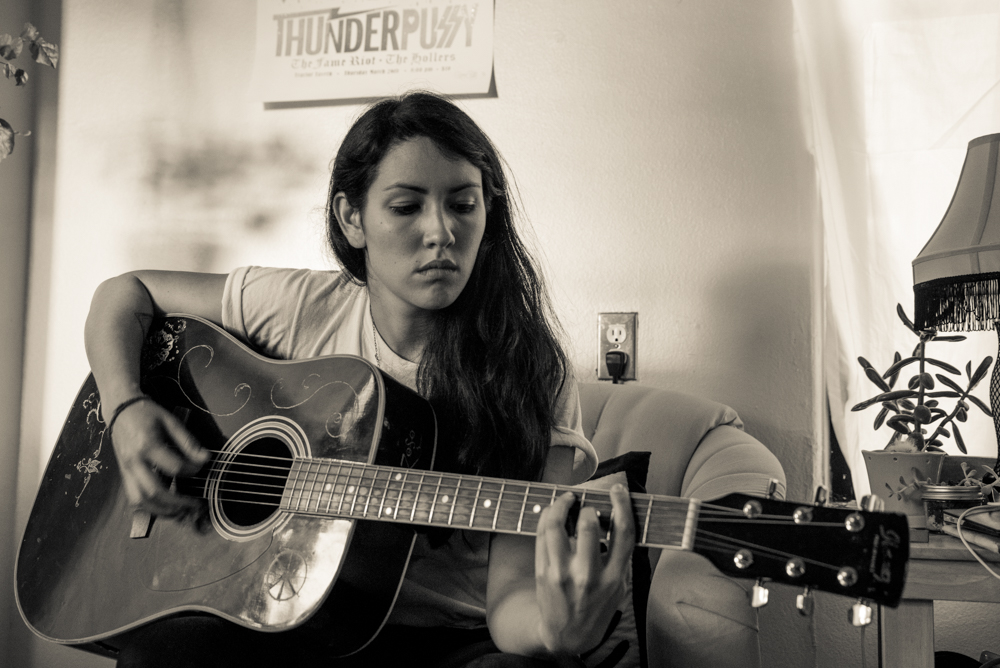 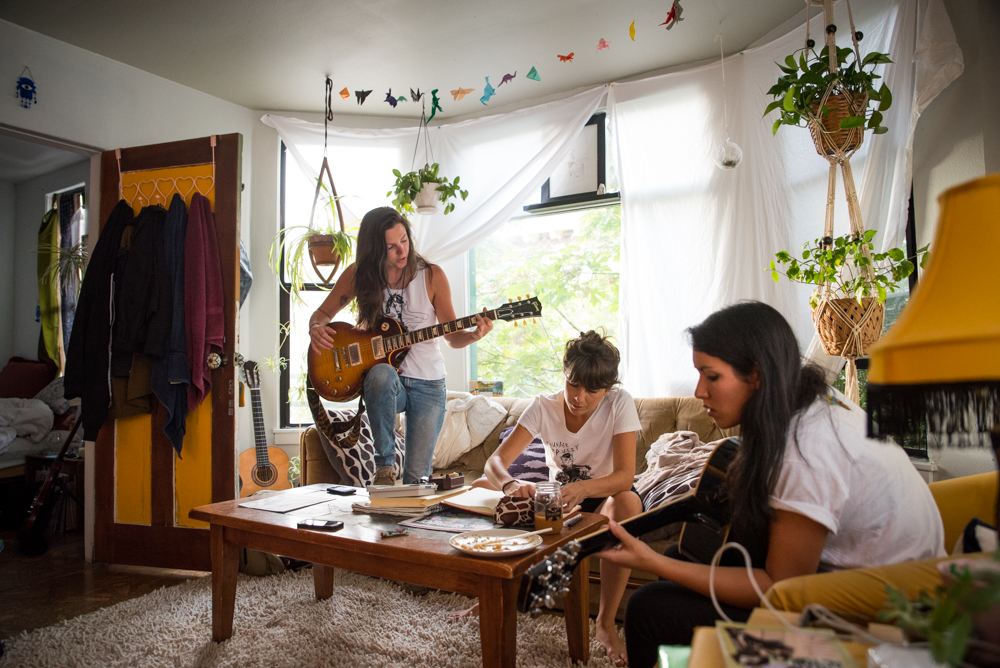 Lena and Molly and Whitney. (Photo by Christine Mitchell) 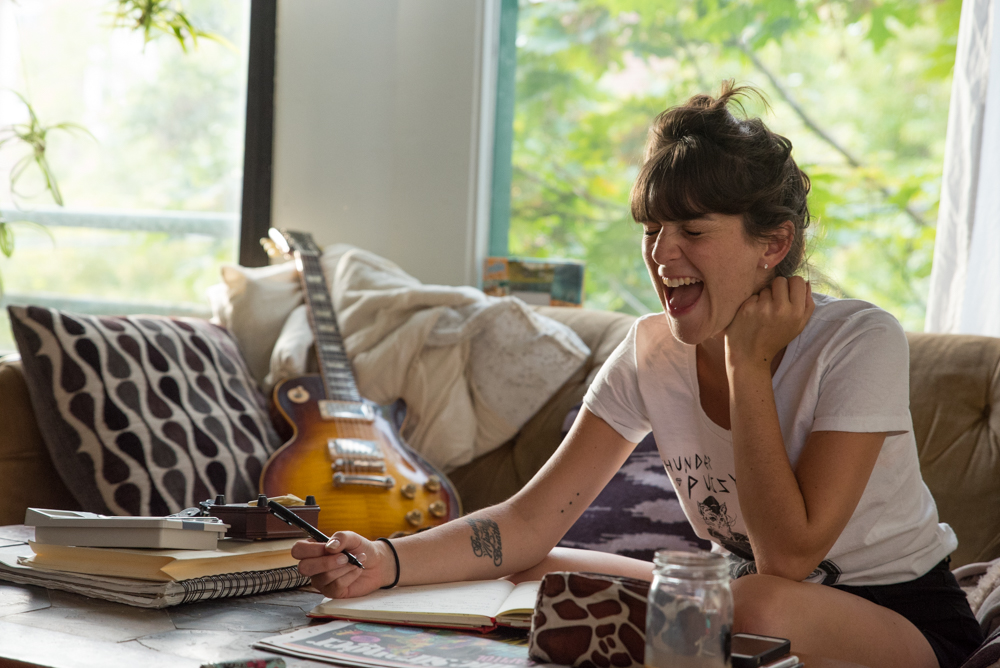 Meanwhile, dancers Emily and Danielle return for another bout of practice and costume discussion: black sports bras, black shorts, and black Converse, a good chunk of it Molly’s own clothing. Again, it’s incredible watching these ladies dance. One of the girls kicks her leg so high that she rips her jeans. 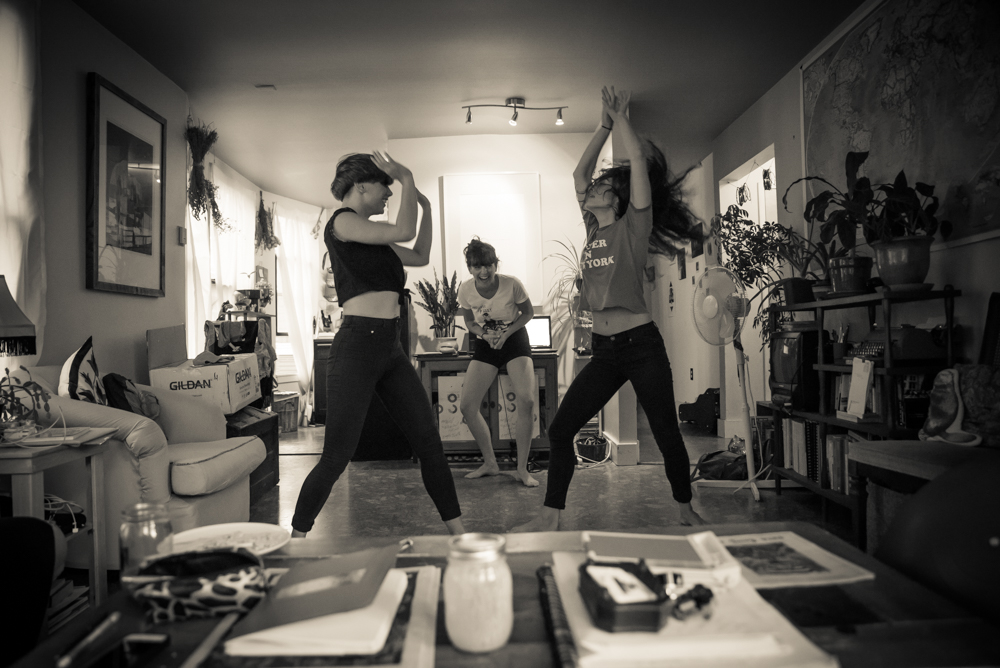 Whitney returns with the costumes for the show. The costumes humorously fit into a single gallon Ziploc bag. Lena goofily crams her gold lame headband onto her forehead, and Whitney disappears, only to return wearing a top with a zipper and gold lame webbing and a pair of obnoxiously wonderful gold hotpants (also Molly’s). Molly also disappears, but is gone for a while, seemingly having some technical difficulties with her costume. We don’t see it on her until showtime. The appearance of this little gallon bag is a signal of the impending performance; everyone has a beer or a drink. Whitney digs in the fridge wearing her costume to find a maraschino cherry for her highball cocktail, and we ham it up a little. 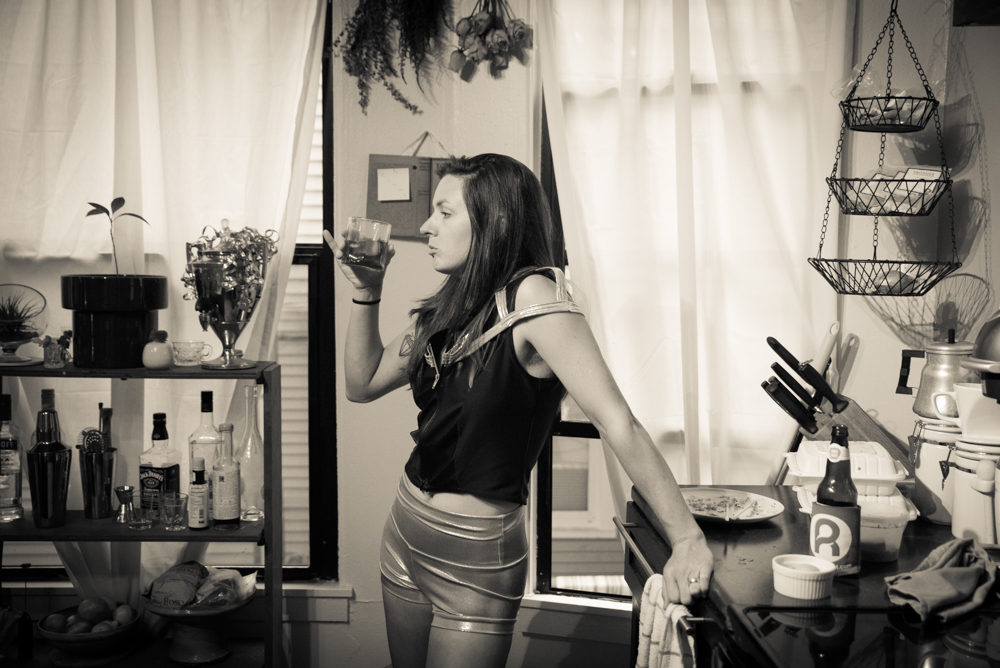 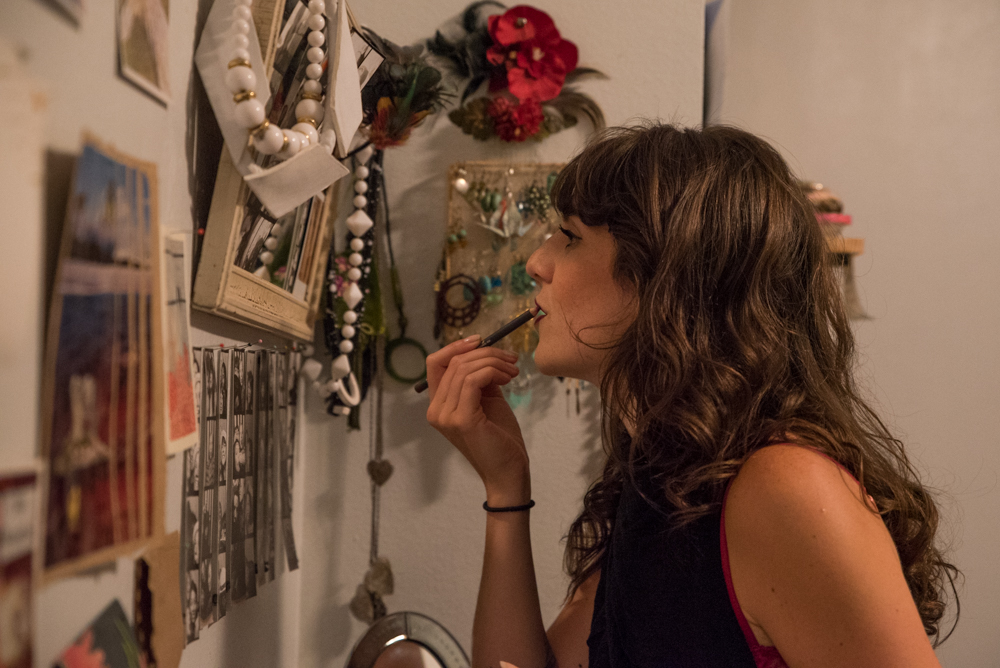 Molly getting ready in the back room. (Photo by Christine Mitchell)

When the time comes (which is after a discussion about the Spice Girls and their connection to Sonic The Hedgehog), everyone stuffs into the van along with all of the band’s gear and we drive to Neumos, singing along to Beyonce (“Who run the world? GIRLS!”) while watching videos via smartphone.

The van pulls onto the rainbow crosswalk right behind the Main Stage at Capitol Hill Block Party, where we meet back up with Leah and videographer Cheryl Ediss. Gear gets dragged out of the van and I head around to the main entrance to pick up my photo pass. I reach the side door at Neumos just in time to follow the band down into the basement, where Barboza and the green rooms are located. Everyone grabs either a PBR or a water. I run into SMI contributor Alex Crick, who is hoping to grab a portrait of Thunderpussy for his CHBP portrait series. They decide to do it after the performance, and Alex and I hurry upstairs to position ourselves to photograph the show.

The band comes out for a live soundcheck since there are just short breaks between bands because of the festival. I snap a few shots. 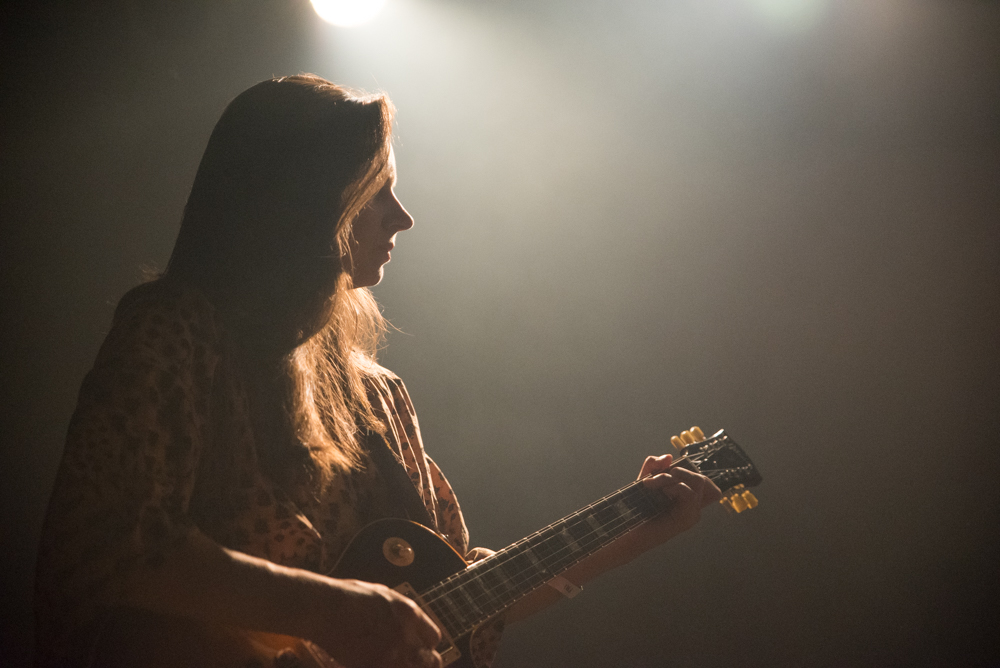 The show begins. Molly’s outfit makes her look like a spaced-out aerobic instructor, all spandex, rhinestones, and more gold lame webbing. The whole thing is another forty-five minutes of sheer rock and entertainment, par for the course for their shows. One of the great things about a Thunderpussy show is that while you know it will be tongue in cheek sexy, with innuendos both in the lyrics and in the physical performance, you never know what form it’s going to take, and it’s rarely something that’s repeated from show to show.

During the show I reflect on the change that comes over these women while they are on stage. Earlier in the afternoon they were at ease with each other, laughing over a flubbed bridge on one of the new songs, questioning each other about how things should go. Molly moved to the music in the small square footage allotted her. But on the expanse of the stage, the four musicians are nowhere near indecisive or just “working things out.” They work as if connected by one brain and charge ahead, roaring across the expanse of the crowd. Molly explodes across the stage, her dance moves contorting her with exacting grace. The two quietly holding hands in the van become vibrating sexual counterparts; Molly and Whitney may be the Toxic Twins, but their drug isn’t heroin: it’s each other. It’s powerful stuff.

The new songs are met with roars of approval. Molly wields a foam lightsaber. Whitney plays her guitar with a bow a la Jimmy Page during a cover of “Dazed and Confused.” Molly holds her leg high over Whitney’s shoulder as Whitney blasts Molly’s crotch with rock and roll. For the final two numbers, the dancers take the stage and the crowd seethes with glee. After the now iconic, eponymous ending song, Thunderpussy and their dancers fling themselves into the crowd to surf with wild abandon. It’s unimaginable that anyone present wasn’t won over. (Photos of the performance can be viewed in the gallery below.)

Back in the green room, everyone gathers in the bathroom for a group portrait with Alex. 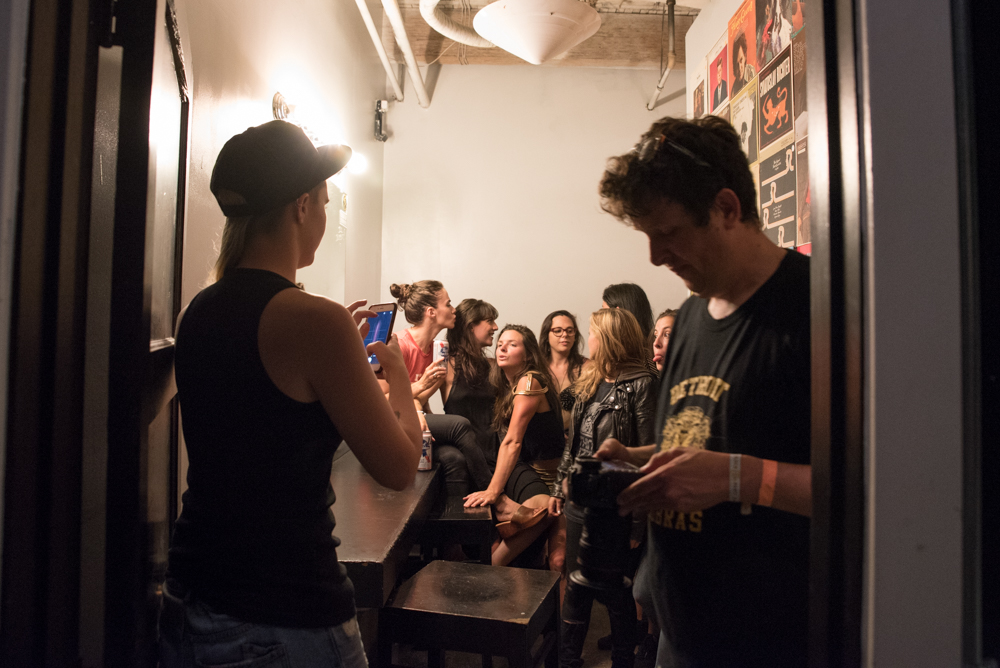 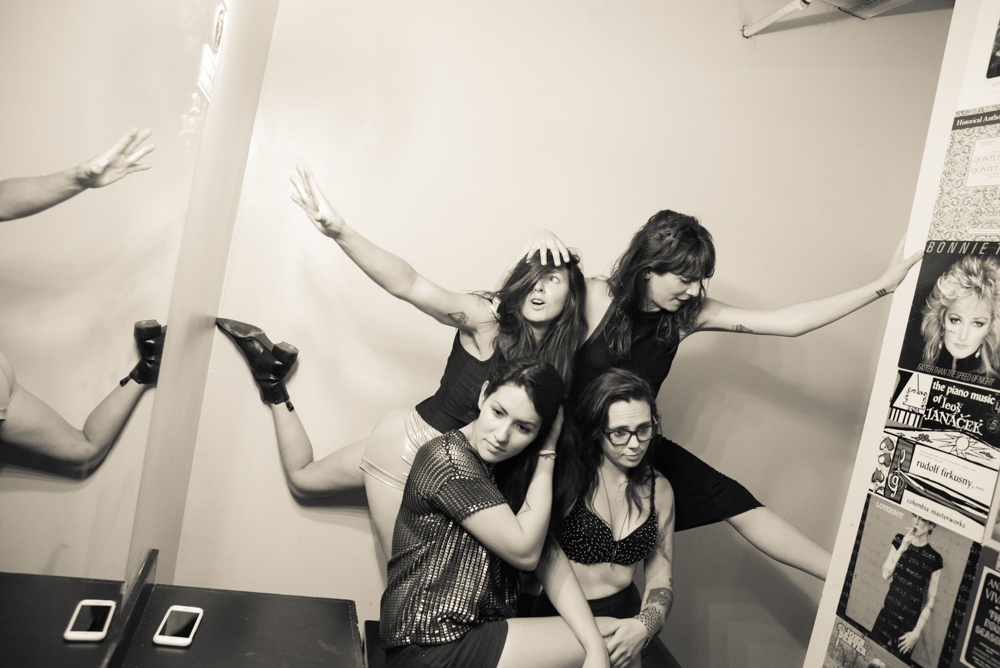 Alex and I decide to call it a night, and the Thunderpussy crew heads over to play a couple of hours of Smash Putt. I’m a sweaty mess after the humid day and energetic show. I wouldn’t trade my experience for the world, however. Thank you, ladies. You’re the best.

Christine Mitchell has been poring over album liner notes pretty much since she acquired the skill of reading, and figured out the basic structure of rock songs at an early age. Whether it’s the needle popping into the first groove of the record, the beeps that signal the beginning (or end) of a cassette tape, or digital numbers ticking off the seconds from zero, music brings Christine happiness, ponderous thought, opportunities for almost scientific study, and sometimes a few tears. When she started attending live shows two decades ago, a whole new piece of the puzzle clicked in and she has been hooked ever since.
Related ItemsCapitol Hill Block PartyChristine MitchellLeah JuliusLena SimonLife In PicturesMolly SidesNeumosNewsPhotosThunderpussyWhitney Petty
← Previous Story Fans Flock to Final Date on 2015 Vans Warped Tour
Next Story → Alabama Shakes and Melodic Caring Project Make Magic at Marymoor