Home / Reviews / Local Artists / Skate Like A Girl Benefit: In a Perfect World

Skate Like A Girl Benefit: In a Perfect World

By Christine Mitchell on January 18, 2016@Housetornado37 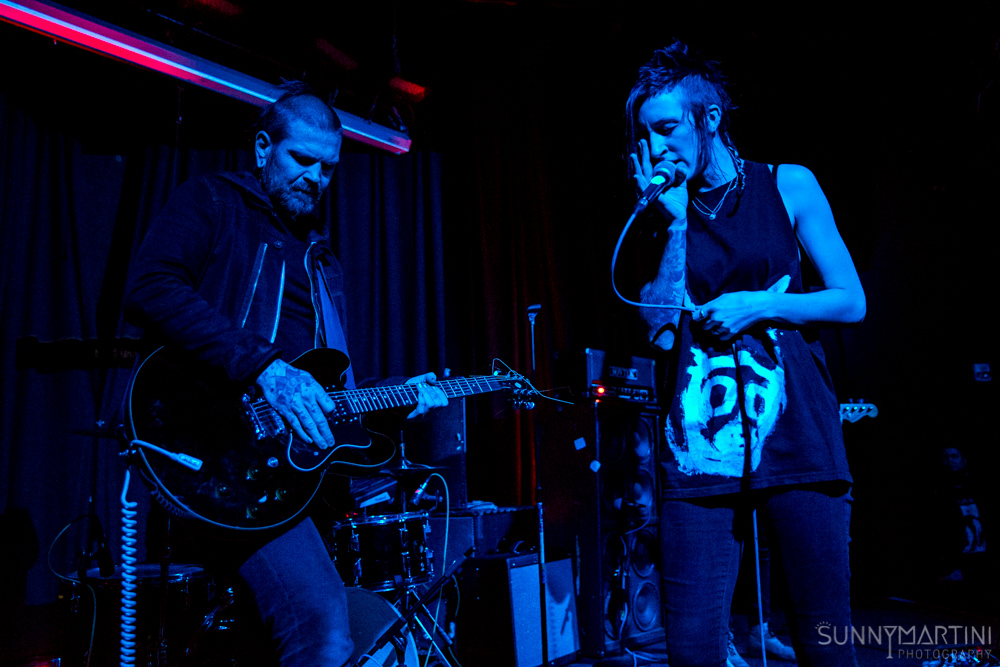 An adorable toddler girl wears sky blue earphones, her mother squatting next to her at the lip of the stage. The girl points at each of the members of Mommy Long Legs, whose oversize, technicolor wigs turn them into snarling punk Disney Princesses. A grade school boy sits with his two brothers, also in front, proclaiming “my ears are DEAD” after Mommy Long Legs’ set, with a tone that suggests he’s bragging about it.

Those same brothers stare with awe at Gutless’ Bree McKenna. It’s less about her blue lipstick and more about the cool ease with which she rocks out on her bass, which is decked out with Lisa Frank stickers and googly eyes.

Two boys who seem to be around ten years old head-bang and pogo to Ever-so-android. They grin at each other. They’re having the time of their lives as Hope Simpson gesticulates and howls lyrics directly above their heads.

In a perfect world, we would all rock together, young and old alike, reveling in art and artistry. The Vera Project provides a space where that dream is a reality, housing everything from silk screening, School of Rock, and music business classes to live music shows for all ages. Friday night’s show benefiting the Skate Like A Girl organization was a stellar example of this model. Music is for everyone.

Gutless doesn’t have an online presence yet, but that doesn’t matter for several reasons. When the band members walk on stage and they are Lisa Prank, Bree McKenna (Tacocat, Childbirth), and Julia Shapiro (Chastity Belt, Childbirth),  it’s going to be good. They’re wearing basketball jerseys with lipstick that matches. And their songs are goofy and cute with a messy, jagged edge. The only lyric in their tune “Courtney Cox” is “I’m going to get David Arquette and Courtney Cox back together if it’s the LAST THING I DO!!!!!!” (yelled emphatically, of course). If the aim is for these talented ladies to let off some steam and have fun doing it while making the crowd smile, mission accomplished.

Mommy Long Legs upped the ante with their aforementioned wigs and snotty punk tunes that pounded into the room at breakneck speed. From “Haunted Housewives” to “Catcallers” to the crowd favorite “Assholes,” Lilly, Melissa, Leah, and Cory spewed feminism in the best sort of way, friendly as all get out and leaving no room for misinterpretation. Plus: glitter.

Ever-so-android started their set after what was the most meticulous sound check of the night. It wasn’t pretentious: they wanted to sound their very best. And from the moment the Skate Like A Girl promo video ended and the band took the stage, it was obvious that they owned the night. From the dark dirge of “Moment” to the anguished scream that ended “Learn To Crawl,” Hope Simpson’s gorgeous voice held the crowd in thrall as she, guitarist Drew Murray, bassist Ian Forrester, and drummer Ben Hilzinger performed. Ever-so-android’s set was tight, yet layered, as most tracks began with an electronic beat that the instrumentation and vocal built upon and enlarged. Simpson canvassed the stage and the crowd, connecting with the audience by singing directly to them and having them sing back to her. She clambered up onto stage monitors and threw herself down on the stage floor, she swung her mic like a shaved-headed Roger Daltrey. The band’s slightly menacing appearance was tempered with between-song banter about Powerball. After all was said and done, it was clear that the crowd had witnessed one of the best bands in town put on a great performance, an all-ages venue notwithstanding.

After an intermission filled with raffle prizes and silent auction winners, it was time for Dude York. Their set felt a bit deflated after Ever-so-android and the long break; many of the younger set (and their parents) had filtered out to head home. Still, the band did their best to keep up their poppy, yet sneering attitude. Their mid-tempo guitar ditties put the crowd into a happy place, as videos of trains emerging from tunnels played on the video screen. “Something In the Way” (“it’s not a cover!” proclaimed lead singer Peter Richards) was representative of the band’s sound, which seemed to cast a loving gaze back to ’90s alternative.

All in all, the benefit for Skate Like A Girl appeared to be a great success, thanks to all of the volunteers’ hard work and the varied, talented bill. It was refreshing to see the wide range of humans who appreciate live music and safe places for kids and adults of all ages.

Christine Mitchell has been poring over album liner notes pretty much since she acquired the skill of reading, and figured out the basic structure of rock songs at an early age. Whether it’s the needle popping into the first groove of the record, the beeps that signal the beginning (or end) of a cassette tape, or digital numbers ticking off the seconds from zero, music brings Christine happiness, ponderous thought, opportunities for almost scientific study, and sometimes a few tears. When she started attending live shows two decades ago, a whole new piece of the puzzle clicked in and she has been hooked ever since.
Related ItemsBree McKennaChildbirthChristine MitchellDude YorkEver So AndroidFeatureGutlessJulia ShapiroMommy Long LegsSkate Like A GirlSunita MartiniTacocaTVera Project
← Previous Story Sasquatch! 2016 Launch Party: Classic Funk Fills Neptune Theatre
Next Story → LP Review: DBUK – Songs One Through Eight