By Christine Mitchell on September 7, 2016@Housetornado37 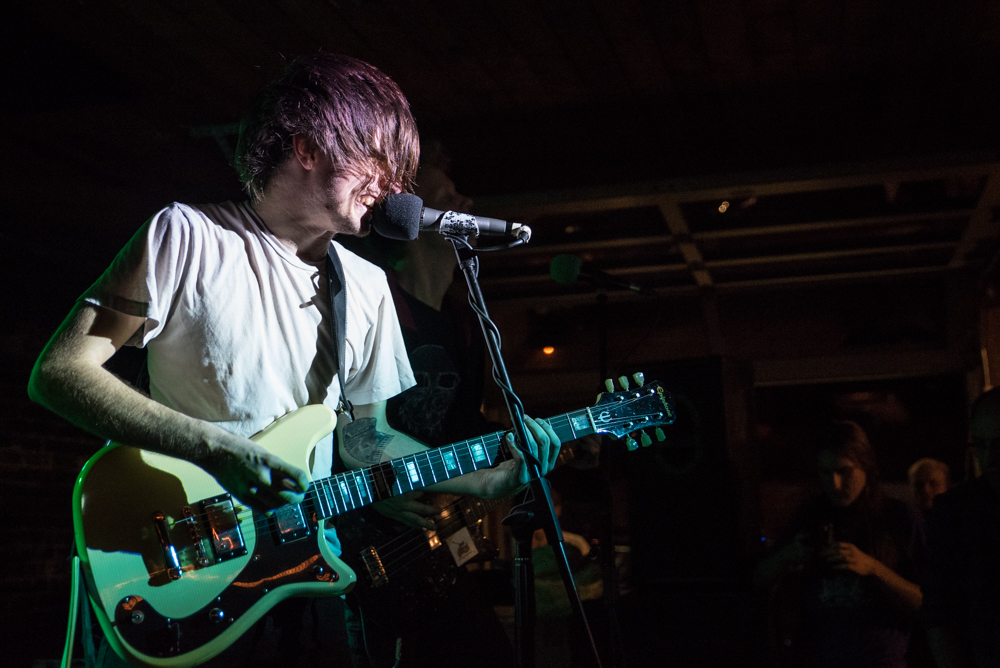 Crystal Desert at The Anchor Pub (Photo by Christine Mitchell)

The night was stuffy. Fans blew across the room, but they didn’t seem to help. Sound equipment, lights, and human bodies emitted heat. An untold number of concerts have unfolded in this manner, but Crystal Desert’s show at The Anchor Pub last Friday had a singular air about it. It was hometown pride, through and through. Four Everett bands that held their own and kept a crowd. Five painstakingly-made 7″ records that were cut in Everett and were snapped up in no time flat. Shirt after shirt emblazoned with “Everett to the grave” was purchased with a grin, every time. And four performances that were confident, and as rock solid as they were varied.

Oliver Elf Army dialed the quirk all the way up to eleven with delightful results. The guitar and drum duo didn’t crash and bash, preferring instead to make all of their punches lyrical and humorously wry. Songs like “Booty Warrior” (about “a white Mr. T” type) and “Bellevue Brats” (apparently they must be drowned) were laugh-out-loud funny while at the same time alluringly hypnotic. Martin and Mary Adams may deem their shows their “date nights,” but the reaction from the crowd and buying up of the aforementioned t-shirts point to something far more than that. Interested parties should check out The Mystery of the Booty Warrior on Oliver Elf Army’s Bandcamp page. It won’t disappoint.

Ryile Smith apologized for bringing down the general mood, but it wasn’t needed. His songs, created under the moniker of Crater Lakes, were definitely of the darker variety but were masterfully executed. The reverb effect on Smith’s vocal brought a warmth to the set, and his intense delivery kept the attention of the room. If the demo of “Youth Dew” on Soundcloud is any indication, Crater Lakes’ second album will be spacey, poppy shoegaze with an acoustic bent.

The Moon Is Flat has always been experimental and a little mercurial. Lead singer and guitarist Kirk Rutherford will shift the band’s set list around up until the moment of the performance as he gauges the crowd, the mood, the general aura of it all. Their songs are psychedelic jams that are lengthy and intense, with an open-ended feel. So it was eye-opening to see the band lay it all out on stage like a freight train with a one track mind. The move paid off in spades with the audience, who hooted, hollered, and got their way in the form of an encore. It was perfect that the first vinyl made and sold in Everett (by Soniphone Records) was a live track from this band and sold out immediately at this show.

During Crystal Desert’s sound check, bassist Christian Smith held up a deck of Harry Potter playing cards, asking for someone to claim them. He protested that they weren’t his, then started to flick them out, one by one, into the audience. He then donned a wizard robe, the band began to play, and it was Black Summer for a solid hour.

Crystal Desert’s dark-ass, garage-goth punk is what we’ve all been needing for a good long while. Ryan Alexander’s bleak worldview is a painful yet rewarding shot in the arm for what ails us in an ailing world: life sucks, so let’s give life the finger. The delivery system for this is swift and punishing: Alexander twists and flails, twining his fingers up through his unruly mop to expose his gaze on the crowd before ejecting a scream into the mic and falling away again. Drummer Joshua Ihler is a shirtless head of hair that delivers his hits relentlessly and with force. Meanwhile, Smith acts as Alexander’s foil, pushing when the other pulls, and yelling into the mic when the other is caught in rock throes.

There were hints of this band’s merit a year ago, but it took the addition of Smith to turn Crystal Desert into what it is today, and it’s fucking glorious. Their cover of The Wipers’ “No Fair” was released just last week, and their live version was raw and full of energy. The closer, “Sick Of Living,” contained another sliver of Smith’s wit as he dove into the famous bass solo from Fleetwood Mac’s “The Chain” before laying down his usual solo for the song (which is just as catchy, btw).

Everett to the grave, indeed.

Christine Mitchell has been poring over album liner notes pretty much since she acquired the skill of reading, and figured out the basic structure of rock songs at an early age. Whether it’s the needle popping into the first groove of the record, the beeps that signal the beginning (or end) of a cassette tape, or digital numbers ticking off the seconds from zero, music brings Christine happiness, ponderous thought, opportunities for almost scientific study, and sometimes a few tears. When she started attending live shows two decades ago, a whole new piece of the puzzle clicked in and she has been hooked ever since.
Related ItemsChristine MitchellCrater LakesCrystal DesertFeatureOliver Elf ArmyThe Anchor PubThe Moon Is Flat
← Previous Story Brandi Carlile Redux at ZooTunes
Next Story → Bumbershoot Day 1 Recap