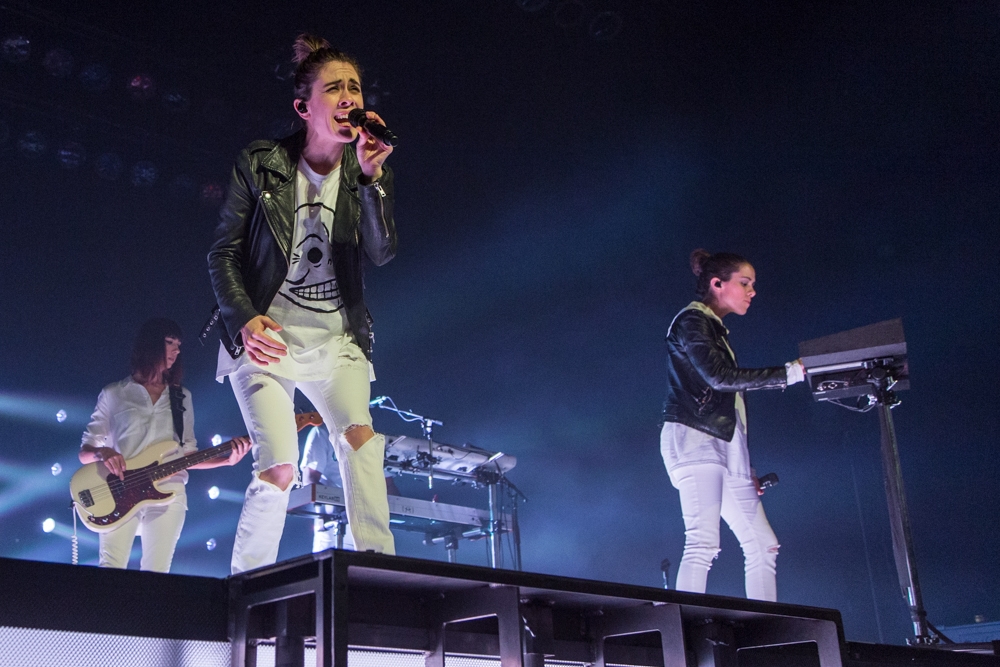 Tegan and Sara at The Moore Theatre (Photo by Stephanie Dore)

The bridge from indie to pop is well-trodden, but perhaps the best-shod feet to cross it as of late are those of Tegan and Sara. The Canadian twin sisters have made a surprisingly smooth transition from indie singer-songwriters skirting the mainstream, acoustic guitars in tow, to full-blown electro-pop sweethearts. In support of their eighth studio album, Love You to Death, released earlier this summer, they made the final tour stop of this North American leg at Seattle’s historic, and surprisingly intimate, Moore Theatre.

Opening the show, UK singer/songwriter/producer Shura – née Aleksandra Denton – showed off why her synth-laden pop tunes are gathering buzz with a 45-minute set. Her effervescent tracks were well-crafted amalgamations of fact and feeling, combining deep lyrical writing with sweeping, lo-fi pop. While she didn’t put on much of a “show,” per se, Shura was an understated, ear-opening choice, delivering tracks from her debut Nothing’s Real. Given her presence as part of the growing scene of young, queer pop stars, she was really a great choice for this particular crowd.

The three-story venue had filled to the brim by the time T&S’s opening came on, with Le Tigre’s cover of “So Excited” playing over the speakers and the lights going dim. As the girls and their three spectacular backing musicians took to the stage, they immediately endeared themselves with little waves to the crowd before breaking into “Back In Your Head,” from their 2007 album The Con, and a few tracks from the album that really broke them into the pop-mosphere, 2013’s Heartthrob.

While both sisters are talented multi-instrumentalists, their live show for this tour was limited to a couple of sample pads, Tegan pulling out an electric guitar for a couple songs, like the rocking “Northshore,” and then a two song acoustic venture mid-set. For “The Con” and “Call It Off” Tegan whipped out a pretty acoustic guitar and the girls stood center stage for a well-practiced sing along of both of these fan favorites. Then awash in what was truly a picturesque light show, they closed the regular set leaning heavily on their newer, radio-friendly, electro-pop singles. With “BWU,” “U-Turn,” “Boyfriend,” and the final “Closer,” ringing beautifully through the theatre.

Throughout the show, both sisters bantered closely with the crowd, taking purposeful breaks to do so, with the lights raised. It was lovely to hear them tell personal stories, joke with the audience, and maintain what has come to be their personal brand of frankness while compelling the crowd to vote. Despite the fact that they’ve taken quite a turn from their early work – see 1999 debut Under Feet Like Ours – T&S have managed to actually still sound like themselves, crafting excellent, catchy pop all while maintaining an open conversation within the LGBT community – both sisters are openly gay – gain new fans, and not alienate the fans of their early work.

When you get right down to it, people grow, and the path that these sisters have followed is only natural when going from angsty lovelorn teens to #adulting in the real world. If there were any question about T&S’s talent or likeability, their live shows continue to dissipate that, and a three-track encore to much excitement certainly didn’t hurt.

Tegan and Sara’s tour continues on its second US leg through November. Find tickets here.