Sleepover Club’s ‘My Other Dad Is Your Ride’ 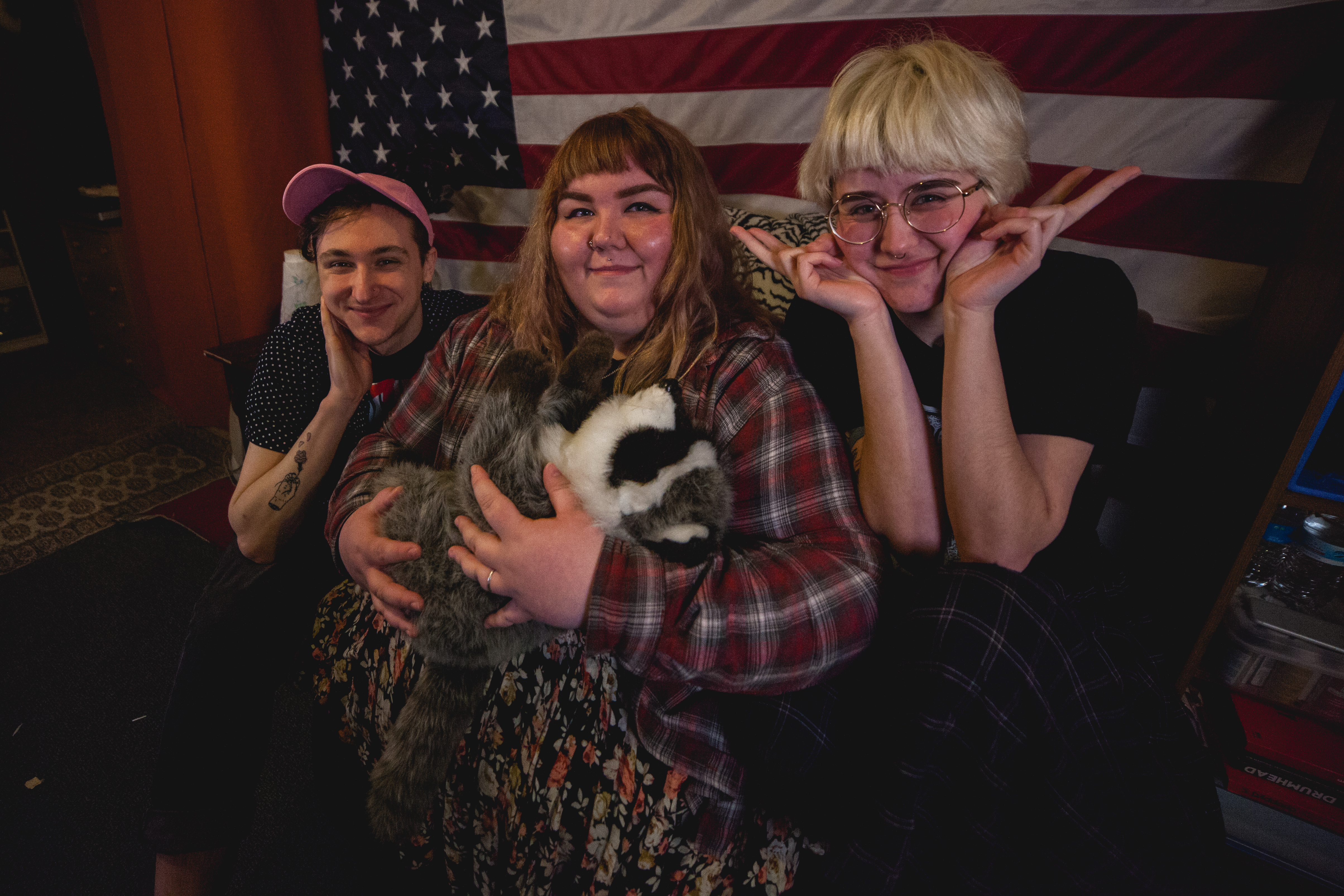 Everett’s Sleepover Club is fun, with a side of “fuck you.” Championing lyrics that are equal parts pointed, witty, and downright goofy, Sleepover Club provides punk rock ripper after punk rock ripper, with each song somehow catchier than the last, on their new record, My Other Dad Is Your Ride (released by Youth Riot Records). The band’s songs about life, bugs, and adventures in adulting (most of which, failed) hit hard both melodically and with the social messages they present. Put simply, Sleepover Club sounds pissed.

Beginning with the perfect opening track, “Corpse Kid,” My Other Dad Is Your Ride wastes no time in introducing the listener to Sleepover Club’s signature sound – raw, thrashy punk guitars (courtesy of Sierra Rozario and Katee Brown), hard-hitting drumming (provided by Sid Jensen), and a wide variety of vocal sounds and styles. Sleepover Club does a great job of laying a foundation of full-throated rhythm guitar chords, often with a snarky lead riff layered on top, backed up by a variety of beats; though pounding tom lines and lightning-fast fills are Jensen’s specialty, more withdrawn moments in drumming are peppered throughout the songs to help bring the dynamic down (see “Bugs” and “Single Dads,” for example). Despite pure punk intentions, some of the tracks on this record are groovy and danceable – namely, “Bugs” and “Bless This Mess.”

Sleepover Club have an incredibly unique way of disarming their listener with sparkly, happy-go-lucky melodies, before stabbing through with crucial social commentary and dark humor. Such tracks as “BAGUNGA” make an extremely strong statement (in this song, definitively anti-gun); however, the lyrics are often from the point of view of the person opposite from Sleepover Club themselves (in “BAGUNGA” – “If you don’t believe me/Just take a look at my hip/If you want to test me/Just make fun of my dick”). “Single Dads” makes one almost feel for its subject, a seemingly laid back, cargo-short-wearing adult male, before turning the listener on him by revealing his inner monster (“I’m afraid/Of maybe what I’ll say/If I find out my precious boy/Might be gay”).

All three members of Sleepover Club share vocal duty (both leads and backups), and while each member’s voice is clearly distinguishable, they all realize the same goals – be bratty, be angry, and run ragged from screaming and yelling. It is this high-emotion punk that Sleepover Club embodies with passion; excellent proof of which can be found on the second half of their album, Side Butt (the first half dubbed Side Boob), consisting of four live tracks previously released last October. Sleepover Club’s live energy is palpable here, and this gives a lot of insight into just how well that energy translates to their recorded songs. Be they on stage or in the studio, Sleepover Club absolutely tears it up.

The band chooses to end their record in true Sleepover Club fashion with the live track “Wednesday Off.” Consisting of little else (lyrically) besides the shouted line “Wednesday off!,” Sleepover Club squeezes out every drop of energy they have left, unrelentingly shredding their guitars and drums to the very last beat. Sleepover Club will perform tonight at the 2018 Fisherman’s Village Music Festival in Everett¸ just before fellow Everett band Oliver Elf Army, at Normanna Lodge for a 6:30 pm set. They then take the stage at Cascadia Brewing Co. in Olympia, again with Oliver Elf Army, on Saturday, April 7th. My Other Dad Is Your Ride is available now on Bandcamp and on Youth Riot Records.

Paddy Moran is an active musician and participant in the bustling Seattle music scene. When not discussing his extreme distaste for eggs (any style), Paddy can usually be found fumbling around, looking for lost personal items and accoutrements. Have you seen his backpack? It was right here a minute ago; someone must have moved it. In his personal life, Paddy requires almost constant, near-24/7 audial stimulation, which explains both his undying love for new music and why he won't just stop talking already. Oh, there's my backpack. I mean his.
Related Itemscascade brewing coEverettFeaturefisherman's villageFisherman's Village Music Festivalkatee brownmy other dad is your ridenormanna lodgeOliver Elf ArmyPaddy Moranryan villasantisid jensensierra rozarioSleepover Clubyouth riot records
← Previous Story Pussy Riot Brings Inclusiveness and Vagina Flags to Chop Suey
Next Story → The Darkness Brings Tour De Prance to Showbox