By Christine Mitchell on August 18, 2015@Housetornado37 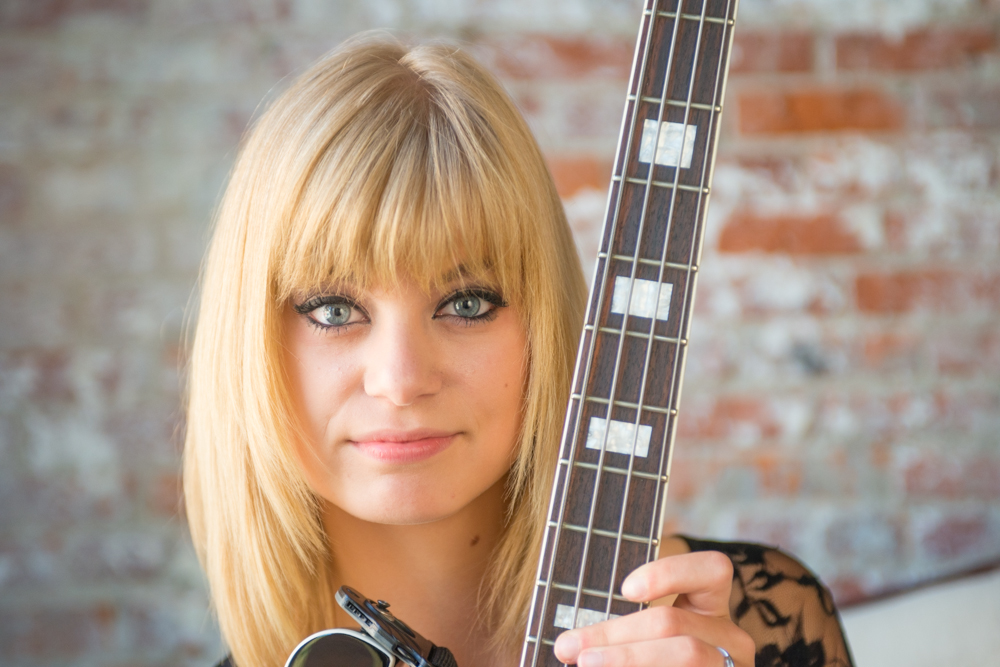 This week I was able to bring Savanna Räy Dohner to the Hot Seat. Savanna studies bass under Jeff Rouse (The Guessing Game and Duff McKagan Loaded) and has received recognition from local artists – with offers to play with local bands. Savanna,  a 16-year-old prodigy on the bass, recently went out on her first tour, joining Valadares during their west coast stint. Since her tour, she has been writing new music and is looking forward to recording and getting back out on the road.  SMI is lucky to get an exclusive on her first interview, and we look forward to covering Savanna in her future endeavors.

Below is an excerpt of my interview with Savanna:

1) Tell me about your musical background.

I grew up in an extremely musical family all around. My mom was a concert photographer and started taking me to shows when I was little. By the time I was four, I was telling my parents that I wanted to be a “Rockstar.” I started handing out “consurt tikets” to family and friends, they were written in crayon on scrap pieces of paper. My Mom’s tattoo artist still has hers. I was almost 10 when I picked up my first bass, I knew that very moment, this is what I wanted to do. That was it. I then played and auditioned in symphonic bands and jazz bands. I made it into the Oak Harbor symphonic band after they hadn’t had an electric bass in over 17 years. Just over three years ago, I started taking lessons from my mentor, Jeff Rouse. He continues to work with me and has been a big part of how I have developed from a jazz/symphonic bassist, into a rock bassist.

2) When did you know this was something you wanted to pursue?

The first real concert I went to! I got to see my favorite band, Weezer. The next week I started playing bass. The night I saw them, I looked at my mom and said, “This is it Mom. I need to do that.”

3) What artists do you admire?

I admire any bassist or artist who stands out! The ones that take risks. A bassist is typically known as one to stand in the back, and keep the rhythm going. I’ve learned everything I know, from bassists who do exactly the opposite. Such as Emma Anzai, Flea, Jaco , and Victor Wooten. I want to be THAT kind of bassist, one that will step up and show my chops to the world. This world needs more of that, and I’m ready to give it to them.

4) Is there anyone in the Seattle music scene that stands out?

5) You were recently invited to tour with a band. How was that?

It was interesting! It was definitely an experience! Being on the road, touring, as a 16 year old girl . . . it’s crazy. You gotta be super safe. The band I toured with, Valadares, took every precaution they could to make sure I was completely protected at every moment. It was amazing though, I felt independent. I was out in the world, doing what I love to do. Playing shows with a super talented band! I was honored to be invited to go on tour with them, probably the best decision I have made so far.

Getting to know the band itself was super fun! It was a struggle at points, but after spending countless days stuck in a van with seven people, you learn to make light of situations. And those moments are what make a band. The fights, the make ups. The laughter and the tears. My favorite moments were the moments of laughter, at God knows what. Anything and everything. It was a good time.

7) What is your goal moving forward?

To make rock/punk/metal popular again. Top hits these days are mostly all pop, which to me is disappointing. I want to be a part of something that is changing that. That gives people a type of music they haven’t heard before, that they like, that makes them crave more.

8 ) How do you set yourself apart?

I’m just me! I am Savanna and I play the bass. I don’t let anyone change who I am, on or off stage. I’m not gonna do something because someone else likes it or thinks it’s cool, I’m gonna do it because I want to. Some may think it’s lame that I’m not gonna drink or smoke or any of that nonsense at 16. I’m gonna enjoy my life as a young woman for as long as possible. I just wanna play, share the music, and rock out. I have been dedicated to this for what seems like my whole life. I have the blisters, callouses and countless hours keeping the neighbors up to prove that!

9) What’s been your favorite place to play?

Every venue! I just love getting a chance to play! I’ve been super fortunate to get the privilege of playing the places and meeting the people I have! I love meeting the people who work at the venues. Sound crew and owners, stage guys etc.; they almost always have good hearts, they’re all bonded by one common interest, music. The security guards are some of the nicest guys ever! I love talking to them and thanking them and just joking around. Making those “tough guys” smile is always a goal. Ultimately I respect them all, at every venue, because they are the ones working their butts off to help us and protect us. The people working the venues, make the venues what they are.

Valadares has officially asked me to join the band, so that is super exciting ! I’ve had a blast playing with them and am incredibly grateful that we found each other! I look forward to seeing what we will do next. I’m also stoked to be working with the amazing Caspian Coberly in his band W16! There may be some youtube collaborations in the future too. I’m open for whatever the universe has to offer.

11) Do you have any advice for someone thinking about starting to play?

Just do it. Have tunnel vision. Once you start, you can’t look back. You can’t give up. You just have to close your eyes, grab your instrument, take a breath, and go. Tunnel vision gets you everywhere, I’ve been being told since I was 10, “Oh Sweetie, you need a backup plan, in case this doesn’t work out.” I just didn’t ever listen, and will continue to ignore it.I’m lucky that my parents never said this, however, A LOT of people did. Be stubborn, prove them wrong. Make it work out. And if it doesn’t work, you haven’t tried hard enough. Keep working for it. Keep practicing, till your fingers bleed, till you have a headache. Till everything in you is screaming at you to quit, don’t, just keep going .

KeyArena! That’s a huge dream! I’ve been to so many shows there, if it was me on that stage? I wouldn’t believe it was happening, but it’s a dream I plan on making come true. I think every artist dreams of playing the big stage, but only a few have the hard work, talent and determination to do it. Until then, I am happy playing anywhere and everywhere, because it’s about music. To close: It’s been a hard journey getting where i am. I’ve experienced the worst rejection of my life already, and I’ve only got my feet wet. I only have a taste of what this industry is. But in the end, I’ve gone through hell and back to get to experience the greatest reward i can imagine. Music. At 16 years old, I am already living my dream. I don’t care how much money I earn doing this, it’s about the music. It’s not about the money or publicity, yes, you have to have a good business sense, but I am not in this to be the next Taylor Swift. It’s about the fact that music means something different to everyone. I want to share that with the world. Music is a universal language that i want to speak to every country, island and continent there is. I want to give back what so many others have given to me.

Christine Mitchell has been poring over album liner notes pretty much since she acquired the skill of reading, and figured out the basic structure of rock songs at an early age. Whether it’s the needle popping into the first groove of the record, the beeps that signal the beginning (or end) of a cassette tape, or digital numbers ticking off the seconds from zero, music brings Christine happiness, ponderous thought, opportunities for almost scientific study, and sometimes a few tears. When she started attending live shows two decades ago, a whole new piece of the puzzle clicked in and she has been hooked ever since.
Related ItemsFeatureMatthew LambSavanna Ray Dohnervaladares
← Previous Story Alabama Shakes and Melodic Caring Project Make Magic at Marymoor
Next Story → Gentlemen of The Road Invade Walla Walla