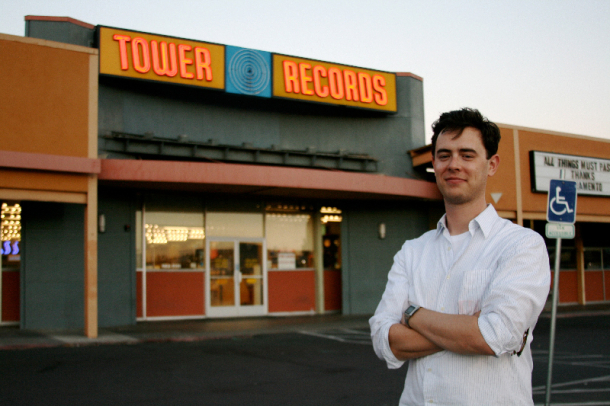 This week SMI Radio’s Greg Roth talks to actor, director and producer Colin Hanks about the documentary film project, “All Things Must Pass: The Rise and Fall of Tower Records.” Colin talks about what Tower Records meant to him, the fundraising process for this project, as well as the history and legacy of one of most iconic music stores in music history. Colin also shares his passion for music and what is driving him to make this film.

This past Monday, June 20th,  Examiner.com featured part one a two part piece about a documentary  The project is called: All Things Must Pass: The Rise and Fall of Tower Records. It is being produced and directed by actor and filmmaker, Colin Hanks. Part II will be coming up this weekend.

Colin Hanks documentary about Tower Records will be labor of love

For those that love music and have special Tower Records stories, this will be an important and must see film. Not only am I covering this story from a journalistic perspective, I am also making a financial contribution to the making of this film. This project aligns with the SMI philosophy that music builds community, is the universal language and that it has the power to unite people of ever race, religion, gender and persuasion.

The Tower Records story is about a man, his company and the unprecedented economic and cultural impact it had on the music industry and people around the world.  Tower Records begins with the man who created it… Russ Solomon. From an early age, Solomon had a special love of music, a dynamic personality and the inventiveness of a crafty entrepreneur.  His first job was sweeping floors in his father’s drug store, located in the Tower Theater building, in the sleepy northern California town of Sacramento.

Not only is he a multi-media journalist, he is also an accomplished musician. He is the founder of SMI and drives the creative look, feel and branding for the publication. His years of writing, arranging, and performing live music in a variety of genres inform his ability to communicate the message and the mechanics of music. Roth’s work on SMI reflects his philosophy that music is the universal language, and builds community. He believes it has the power to unite people of every race, religion, gender, and persuasion.
Related ItemsAll Things Must PassColin Hankskickstarter.comNWCZRadioSMI RadioTower Records
← Previous Story Vicci Martinez Ep. 22 On Demand: “The Voice” (SMI Radio Interview)
Next Story → SMI Radio “Short Cuts” Cody Beebe (Cody Beebe & The Crooks)