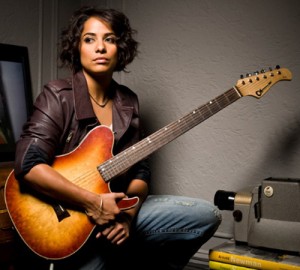 Our own Vicci Martinez is moving on to the next round on NBC’s “The Voice.” Wednesday night America voted her into the final four following her show-stopping performance the prior evening. Congratulations Vicci! The Northwest and perhaps all of America will be pulling for you to bring it on home!

To read more about and see that performance, click the link here:

I chatted with Vicci backstage before to her most recent show in Tacoma a couple of weeks ago. We talked about her experience on “The Voice,” her music, and her inspirations. Also featured are selected cuts from her “Live From Jazzbones” CD.

Not only is he a multi-media journalist, he is also an accomplished musician. He is the founder of SMI and drives the creative look, feel and branding for the publication. His years of writing, arranging, and performing live music in a variety of genres inform his ability to communicate the message and the mechanics of music. Roth’s work on SMI reflects his philosophy that music is the universal language, and builds community. He believes it has the power to unite people of every race, religion, gender, and persuasion.
Related ItemsExaminer.com NWCZ RadioFolkLive Local MusicRoots RockSMI RadioSoulVicci Martinez
← Previous Story SMI Radio Ep. 23 On Demand: Michael “Fitz” Fitzpatrick, John Popper, Perry Acker
Next Story → SMI Radio Ep. 24 On Demand: Colin Hanks