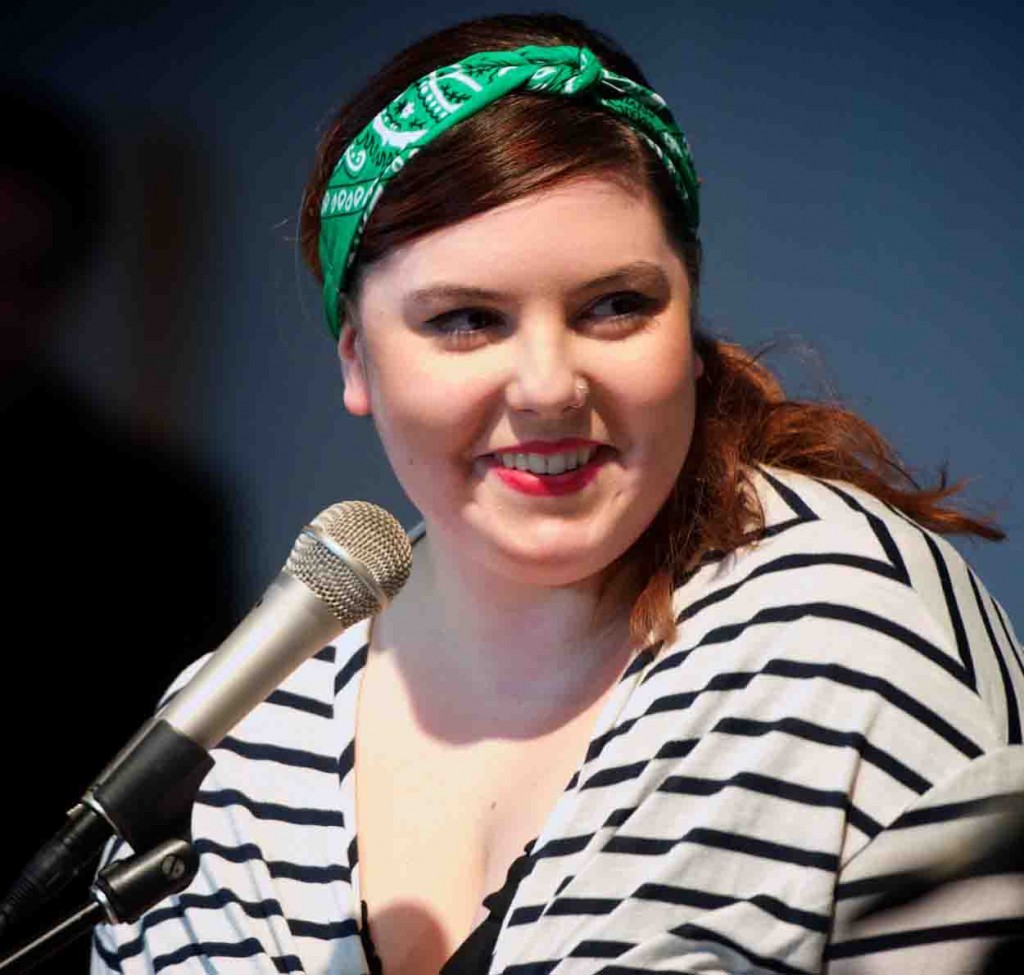 Last year, Seattle Living Room Shows, in conjunction with Melodic Caring Project, delivered wonderful concerts to a live audience. Those shows were also streamed live to children battling very scary, serious illnesses in the hospital. Although each show is different, the stellar artistry and musicianship make for a high-impact event every time.

Fans know that no matter who is slated to play one of these special shows, they will be treated to a great night of music, entertainment, and enlightenment. This past Saturday’s Seattle Living Room / Melodic Caring Project event was billed as a “surprise show.” Without even knowing who was on the bill, music lovers snatched up the 150 tickets in a hot minute. (For many, this was their first ever Seattle Living Room Show.)

What a surprise indeed! In what may be their most ambitious booking feat to date, Carrie and Kristen Watt landed Mary Lambert, Star Anna, Ivan and Alyosha, and Campfire Ok. These artists could easily headline a show on their own, but there they were, all together on one stacked bill. To say that music fans got a great bang for their buck would simply be an understatement.

First up was Mary Lambert. Those familiar with Lambert know that her moving performance on the single, Same Love, from Macklemore and Ryan Lewis’ The Heist, played a huge part in helping pass the same-sex marriage bill in Washington State. With Lambert on electric piano and accompanied by Chandra Johnson on violin, she performed the full version of the song. She also treated fans to selected tracks from her most recent EP, Letters Don’t Talk.

Lambert is great on record, but in a live setting is where she really shines. She wears her heart on her sleeve. When it comes to showing her vulnerability and letting her soul stand naked through her music, she is fearless. Her performance can be summed up in two words: gentle intensity.

Lambert kicks off her Good Feelings Music and Poetry Tour 2013 at Fremont Abbey Grand Hall on Saturday, January 19th. After that, she travels to the East Coast for Several Shows. Tickets for that show are available here. Mary will be next week’s guest on SMI Radio.

Taking time out from a recording session and nursing a cold, Star Anna stepped out of studio and into a car and made her way to SODO to participate in the show. Accompanied by keyboardist and producer Ty Bailie, Star put on a powerful and raw performance with tracks from her most recent album, Alone in This Together.

The Americana / roots artist played Bumbershoot 2010 and 2012.  She also performed with the Synergia Northwest Orchestra last May, and the Seattle Symphony Orchestra last October, in what was one of her last shows with her band, The Laughing Dogs. The singer / songwriter demonstrated the power of her voice and songs in a stripped down, gritty performance.

Rockstar Caden was viewing the show alongside his parents via UStream. His parents snapped a photo of Caden while he watched on. They sent the photo to Levi and Stephanie Ware of Melodic Caring Project during the show. In between songs, Ware held up his laptop and showed Star Anna and the audience the photo of Caden (with guitar in hand) clearly enjoying the performance. The audience was delighted. 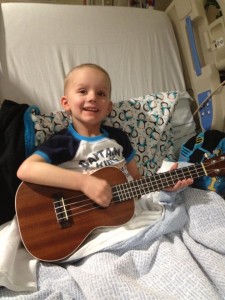 After the show Star hung out with fans and then she and Bailie jumped back in the car to head back to the studio to continue working on her newest effort hopefully to be released  sometime in 2013.

Third up on the bill was Ivan & Alyosha. Accompanied by several talented local musicians,  the band played a brilliant Melodic Caring Project show this past August at the Neptune. In a more intimate environment this time around, the band performed a semi-acoustic set which featured a strong lead vocal performance from Tim Wilson. Ryan Carbary and Tim Kim switched back and forth between slide and acoustic guitar, while Wilson’s brother Pete provided percussion with tambourine  and an aluminum water bottle shaker. The band’s tight vocal harmonies soared throughout the set.

Like Lambert and Star Anna, the band demonstrated that they are just as powerful stripped down in small intimate setting as they are in a theater setting. Fans will get a chance to see Ivan and Alyosha do their thing, electric with other suprise guests this February 23rd at Showbox at The Market. Tickets for that show can be purchased here. 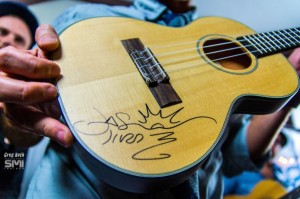 After the I&A performance a drawing was held for a ukulele signed by Jason Mraz. John Stoddard’s name was drawn as the lucky winner. The raffle raised $6,205 for MCP.

Closing out the show was a rousing and uplifting performance from Campfire Ok. The band fronted by Mychal Cohen and backed by the über talented Zarni DeWet, (who joined the band about six months ago) on piano and vocals, Brandon Miller on percussion, Aaron Huffman on guitar and vocals and Andrew Eckes on guitar and vocals, brought the crowd to it’s feet late in the set. Cohen had fun goofing on their friends from Ivan and Alyosha and playfully challenged them to a fight to see who was the better band. Anyone refereeing that bout would have to declare it a draw across the scorers table.

Campfire Ok, was just tabbed to open for The Presidents of the United States of America for their annual Presidents Day show taking place at Showbox at the Market, February 16th. Tickets for that show are available here. 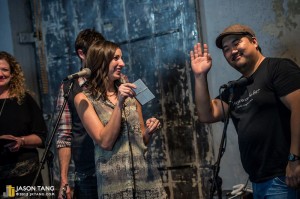 At the end of the evenings performances, Jon Yoon was recognized for his tireless volunteer work for MCP.

Obviously, the fact that no less than four of the region’s most talented and popular artists playing under the same room on one night is a great story in its own right. An equally compelling story is the fact that these artists took time out of their busy schedules to put on a concert for children, that because of difficult circumstances are not able to get out to see live music. The sheer joy that music brings to these children cannot fully be documented with justice in this article.

Thank you so much for our private concert tonight.  My girls had such a wonderful time singing, dancing, playing music, and laughing tonight…so wonderful to have that reprieve.  As a single mom, that works full time and goes to school full time, I can’t always provide things for my kids.  Cassidy has surgeries twice a year and it tears our family apart physically and emotionally.  Music is healing for us.  It has continued to help us bond, grow and stay connected to each other. My kids loved hearing the applause; their names and they LOVED the music.  Thank you!!”

I think this pretty much communicates the impact of these shows. I am fortunate to be able to cover a lot of great performances and festivals throughout the year but nothing compares to taking part in these very special Seattle Living Room and Melodic Caring Project shows. The stellar artists and their music provided a wonderful evening of pure magic. But the real magic is seeing the beauty of a smile on a child’s face while they enjoy these artists practicing their craft streaming live. It truly crystalizes how powerful music and the positive aspects of the human spirit are, when on full display. I am in awe of the talent of the participating artists and humbled by the courage of the children fighting their good fight.

2013 is off to a very auspicious start for Seattle Living Room Shows and Melodic Caring Project. If last Saturday’s show is any indication of what is to come, 2013 is going to be a brilliant year for music lovers and MCP Rockstars!

If you missed the show you can watch replays of the concerts and on camera interviews with the artists by going here.

If you would like to get on the list to attend a Seattle Living Room Show visit http://www.seattlelivingroomshows.com 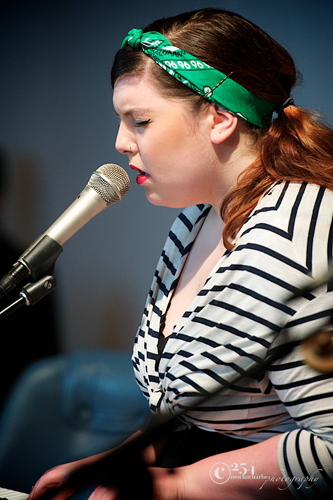 Not only is he a multi-media journalist, he is also an accomplished musician. He is the founder of SMI and drives the creative look, feel and branding for the publication. His years of writing, arranging, and performing live music in a variety of genres inform his ability to communicate the message and the mechanics of music. Roth’s work on SMI reflects his philosophy that music is the universal language, and builds community. He believes it has the power to unite people of every race, religion, gender, and persuasion.
Related ItemsCampfire OkCarrie WattIvan & AlyoshaKristen WattLevi WareMary LambertMelodic Caring ProjectMocha CharlieSeattle Living Room ShowsSeattle Music Happeningsstar annaStephanie Ware
← Previous Story SMI musical highlights of 2012
Next Story → SMI Radio Ep. 79 On Demand: Ben Union and The Fame Riot (Photo Slideshow)