Live Review: Radiohead gets a little funky at “The Key”

By Alicia Kamenick on April 11, 2012@corianderstem 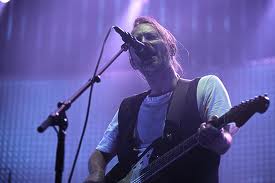 I found my friend in the crowd after the show and asked what she’d thought.  “They’re different from when I last saw them a few years ago.  They’ve gotten more funky.”

Radiohead, bringing the funk?  Never having seen them before, I had nothing in my memory bank for comparison.  But yeah, I could see where she’d gotten that. Even though it wasn’t always easy to get my groove on to their complex rhythms, my body did move.  Maybe not as much as Thom Yorke’s rubber band limbs, but I moved.

Oklahoma’s Other Lives opened the show on a stage full of non-traditional rock instruments: tympani, cello, trumpet.  I’m a sucker for that sort of thing, so I enjoyed them quite a bit.

Radiohead hit the stage at about 8:45 and held the Key Arena crowd in rapt attention for the next two hours.  Amazingly, I didn’t see too many cell phone glows in the crowd.  I’ve been to a lot of shows where the floor is a sea of screens, but for the most part, that wasn’t the case.  How refreshing!

I wouldn’t describe myself as a huge Radiohead fan.  I’ve always found them intriguing, but their albums are pretty hit or miss for me.  Having heard they were great in concert, I fully expected to come out a bigger fan than I was going in.  I figured I’d be happy if I recognized at least a handful of the songs and, if nothing else, would be impressed by the musicianship.

Drawing heavily from their recent output (6 from last year’s King of Limbs, 4 from 2008’s In Rainbows, 2 recent non-album tracks and 1 new song), the setlist had a good balance between their heavier sounds and the quieter, often haunting songs.  Pyramid Song in particular was gorgeous, with Yorke at the piano accompanied at first by only a bowed electric guitar.

Visually, they made great use of individual video panels that hung over the band in various configurations.  The icy electronic beats of Idioteque closed the main set before the band returned for two encores.

The show ended on a high note for me personally, with two of my favorite Radiohead songs: Reckoner and Everything In Its Right Place.  I never envisioned the latter being a clap-along rabble-rousing song, but it was, and it was fantastic.

I left the show impressed and definitely more of a fan than I was – mission accomplished!  I’ll be spending some quality time with their albums and will be adding Radiohead to my list of “must see again” artists.

Alicia is a Midwest transplant who loves Seattle but misses thunderstorms. Her musical obsessions began when her coolest aunt gave her a copy of K-Tel’s Rock 80 album for Christmas when she was 7. She spent many years studying piano and voice, but the force of rock and roll won, so while she still sings in a local chorale, her true musical passions lie more with The Beatles than with Beethoven. When she’s not working at her job in HR, she can be found singing bad pop songs at the top of her lungs … although sometimes she does that
Related ItemsAlicia KamineckKey ArenaLive ReviewRadioheadSeattle Music Happenings
← Previous Story The Revivalists… Amen, I’m a believer (Examiner.com)
Next Story → Live Review: Peggy Sue brings the fun to The Crocodile