By Alicia Kamenick on April 27, 2012@corianderstem 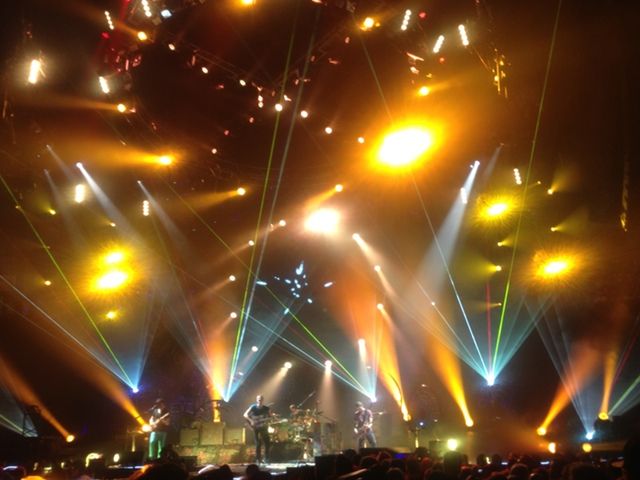 Everyone says that Coldplay is trying to out-U2 U2, but those confetti cannons and big balloons?  That’s straight out of The Flaming Lips’ playbook.  Coldplay also know their way around anthemic songs full of “whoah-oh-oh” sing-along hooks, and the crowd at Key Arena happily complied throughout their Wednesday night show.

Drawing heavily from their most recent release, Mylo Xyloto, the setlist was a little too short for a band with five albums and those kinds of ticket prices.  For a band of their status, 90 minutes is disappointing.

That was my only major complaint with the jubilant show.  That, and the sound, as is often the case in Key Arena, was a bit muddied here and there, particularly during Clocks, which sounded like a murky mess from where I was sitting.

The stage and light show were impressive, with pianos covered in neon graffiti, a giant drum-shaped screen hovering over the band, and audience participation in the form of colored wristbands that lit up and flashed at various parts of the show.

Leading off the festivities with Hurts Like Heaven and a sea of blinking wrist bands, the confetti cannons then kicked in for In My Place and Lovers In Japan, Chris Martin lost in a blizzard of color as he ran, skipped and spun around the stage.

The band moved to the mid-floor extended stage for three songs, including the gorgeous Warning Sign and the Rihanna-assisted “Princess of China,” with the guest appearing in pre-recorded form on the screens.

The main set closed with maximum enthusiasm, the crowd jumping on command to Charlie Brown and singing the “whoah-oh-oh” bits with gusto for Viva La Vida and Paradise.

After a surprise appearance in the cheap(er) seats to play Us Against the World, they made their way through the crowd to close out the show, ending on one last bit of exuberance with Every Teardrop Is a Waterfall.

Back to the Future Theme

Alicia is a Midwest transplant who loves Seattle but misses thunderstorms. Her musical obsessions began when her coolest aunt gave her a copy of K-Tel’s Rock 80 album for Christmas when she was 7. She spent many years studying piano and voice, but the force of rock and roll won, so while she still sings in a local chorale, her true musical passions lie more with The Beatles than with Beethoven. When she’s not working at her job in HR, she can be found singing bad pop songs at the top of her lungs … although sometimes she does that
Related ItemsAlicia KameneckColdplayKey ArenaSeattle Music Happenings
← Previous Story SMI Radio Ep. 58 On Demand: Musician and author Storm Large
Next Story → Here is your Chateau Ste. Michelle Concert Lineup