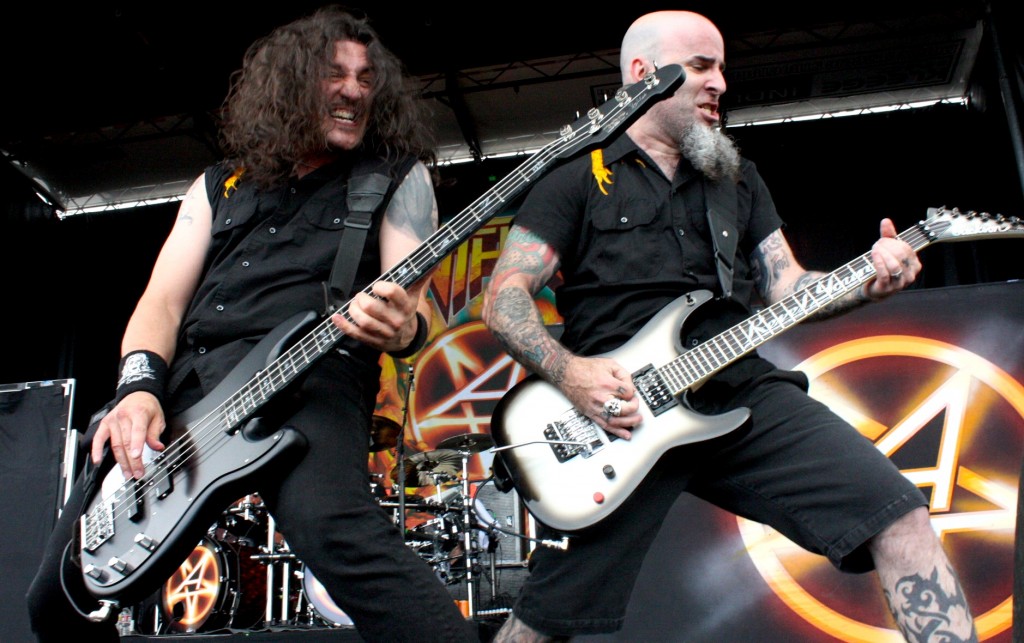 Anthrax at Rockstar Mayhem Festival (All Photos By Alina Shanin)

The Rockstar Mayhem Festival 2012 lineup featured some of the best hardcore/metal bands in recent history, starting with more popular metal stars like Upon A Burning Body and Asking Alexandria and ending with metal legends Anthrax and Motorhead. The indecisive weather couldn’t dampen the electric energy at the White River Amphitheatre brought by hardcore lovers and performers. Quick 20 to 30-minute sets ensured that every band got a shot at impressing the audience with their individual flavors added to the vast genre of metal and expanding their fan base. Main acts including Anthrax, Motorhead, Slayer, and Slipknot received longer time slots, playing for about an hour each.

Opening the Jager stage was Drown Mary, a local band sponsored by Jagermeister that has kicked off the Mayhem Festival for the last three consecutive years. This four-piece group has been around for 12 years and has been called the “Seattle metal veterans” by fans on a few occasions. Frontman and vocalist James Hilkey knows how to work a crowd and set a clear precedent for performers to follow. While Hilkey’s ability to scream to the fast-paced music is undeniable, his impressive singing was a nice surprise. Driving bass lines and sweet guitar licks got the blood pumping as drummer Troy Rimstad set the rhythm for the crowd to jump and mosh to. The entire band connected with the audience and shared a great energy, once again proving that Drown Mary is the band to open the Jager stage.

UPON A BURNING BODY

Upon a Burning Body followed Drown Mary and were the first to see crowd-surfers. The audience almost doubled in size as the late arrivals rushed into the premises and claimed spots on the open field. Upon a Burning Body’s classy look almost contradicted the nature of their music, which is best described as pop metal with some Spanish influences, making them one of the more creative bands to play the festival. All of the band members reminded the crowd of Rockstar’s sponsorship for the event, as they chugged and raised their energy drinks between songs.

Local Battle of the Bands winner Never Met a Dead Man opened the Sumerian stage around 2 p.m. While the crowd was small in comparison to the Jager stage, the love and support for this band definitely matched those of the bigger names. Despite the size and location of the stage, this band gave it their all and brought tons of energy and excitement to Mayhem. The audience danced along throughout the short set, with a few periodically breaking out to mosh.

Whitechapel took the stage minutes after Upon a Burning Body and kept the audience rocking. Vocalist Phil Bozeman surprised many with the power of his voice, which was able to break through three guitars, a bass and an extensive drum set. Ben Harclerode (drummer) utilized his big set up well and did a great job keeping the six-piece band on time. Whitechapel never lost their great stage presence and really embodied what metal’s about.

AS I LAY DYING

Once As I Lay Dying started setting up on the Jager stage, it became clear this was a second beginning to the festival. Tim Lambesis engaged the crowd between songs and riled everyone within earshot with high-energy screams as his bandmates matched the intensity through creative guitar riffs and awesome drumming. This band saw the largest crowd of the afternoon and enjoyed tons of crowd-surfing (including a fan in a wheelchair) and moshing.

Betraying the Martyrs definitely brought a distinguishable “weirdness” factor to the Sumerian stage. This hardcore band from Paris, France, didn’t hold back any artistic idea in terms of both music and performance. Vocalist Aaron Matts gazed into the audience with an intense look in his eyes as his bandmates rocked the quick, heavy rhythms of the deathcore songs. Betraying the Martyrs is a young, six-piece band that features a keyboard/synth player, a somewhat common evolution observed in newer progressive metal bands.

Asking Alexandria was definitely one of the crowd favorites, getting the growing field of rockers to jump and mosh to the quick-paced, melodic metal until the next intermission on the Jager stage. The thick bass and speedy drums sounds echoed to the neighboring stage as the weather switched between rain and sunshine. Danny Worsnop, vocalist and frontman for the band, interacted with the crowd throughout the set, at times stirring the pit and encouraging more moshing. Flip-flops, sweatshirts and sweaty surfers were not the only ones flying through the air as Asking Alexandria gave it their all. Metal Mulisha’s thrill seekers were jumping off ramps and performing their own tricks on motorcycles, as they do every year for Mayhem Festival.

Metal pioneers Scott Ian, Frank Bello, Joey Belladonna, and Rob Caggiano took the Jager stage one by one as the massive crowd was chanting, “Anthrax!” Every single one of them looked excited to be playing Mayhem and wasted no time taking the energy of the festival to a new level. While Anthrax was playing much of their newest record Worship Music, they treated the die-hard fans to Madhouse and Indians, during which Ian stopped the song to pump up the crowd for the “war dance” and get everyone to pump their fists and jump along.

Anthrax closed with I Am the Law, another famous tune that has stuck with the band and fans for the last 25 years. Whether it’s years of experience or the genuine love for music and performing, Anthrax was definitely one of the best bands of Mayhem 2012 and the energy exhibited by these veterans couldn’t be matched by anyone, including those half their age.

The Devil Wears Prada opened the Main stage as the sun was beginning to set and the crowd strolled into the pit and seating areas. Vocalist Mike Hranica obviously enjoyed his time on stage and got the growing audience warmed up for the awaited Motorhead, Slayer and Slipknot. This maturing band has been gaining recognition over the past few years and making a name for themselves in the metalcore community, especially those into upbeat, heavy grooves with Christian undertones.

Motorhead’s performance gathered all the stragglers into the amphitheater and switched up the vibes of the Main stage. The crowd went crazy for Lemmy’s raspy vocals, accompanied by his trend-setting bass lines and the intricate guitar licks of Phil Campbell. Mikkey Dee’s drumming was impressive as always and his two-minute solo astonished everyone in attendance. After a few songs and politely encouraging pep talks from Lemmy and Campbell, bassist Duff McKagan (Guns ‘N’ Roses) joined Motorhead on guitar for a couple of tunes. The ever-popular Ace of Spades got most of the floor to join in a circle pit while screaming the chorus and throwing elbows at those nearby. Once the set wrapped up and the crowd accepted that there will be no encore, Motorhead left the stage with a classy bow.

As expected, Slayer put on a spectacular show, complete with fire balls spitting out of Marshall cabinets suspended above the band and the unforgettable riffs that propelled the group to fame in the early ’80s.

The metal gods were revealed to the screaming audience as the curtain fell, after which Slayer annihilated for an hour without a break. Kerry King killed on his guitar and rocked out the entire time, as usual, while frontman Tom Araya restrained himself this show and skipped the head-banging to reduce further injury to his neck and back. His ability to engage and shake the crowd with fat bass tones, however, remained unfazed.

Devil horns and jumping bodies filled the amphitheater during the performance of Raining Blood, which also got those watching from above to abandon their seats and rock out with the rest of the floor.

South of Heaven and War Ensemble received a similar reaction with tons of moshing, dancing and screaming along. The absence of the legendary Jeff Hanneman (due to being in recovery after multiple surgeries that saved his arm from the flesh-eating disease necrotizing fasciitis, which he contracted about a year ago from a spider bite, according to slayer.net), was a bit of a disappointment, but didn’t hinder the show. Exodus’s Gary Holt filled the big shoes flawlessly and kept the energy up throughout the set. Slayer’s talent and ability to play so fast and yet so tight never fails to amaze those who get to witness the band live. Despite the somewhat unforeseen changes to the band, the music stayed as heavy and as jaw-dropping as always.

While every band of Mayhem 2012 gave it their all and shared some great energy, the show was completely stolen by Slipknot. The extensive attention to detail (starting with masks, matching jumpsuits and elaborate platforms) enhanced the entire atmosphere of the show. Slipknot kicked off the set with four songs off their first album, including the opening track, (sic), Eyeless, and Wait and Bleed. Hearing the familiar tunes sparks the enormous crowd of listeners to rock out in any way they could.

Those watching from the lawn and stadium seats kept up with the moshers on the floor, singing along to every songs and head-banging at every appropriate moment. Out of all the songs performed by the always intense Slipknot, the Heretic Anthem evoked the bigger response with the crowd taking over the “666” part and drowning out the vocalist. As the show progressed, the flashing lights and fireballs were joined by foam, loud explosion blasts and a couple of quick crowd surfs from one of the percussionists. Shawn “Clown” Crahan  took full charge, pounding the beer keg drum and thriving on the elevating / rotating drum podium left the stage at one point for a stroll in the crowd while frontman Corey Taylor kept the show going, switching between his screaming and melodic vocal style.

It should be noted that Slipknot has continued to carry on without the late Paul Gray, who tragically died of an accidental overdose of morphine and fentanyl in 2010. Out of reverence to their fallen comrade, the bass parts were handled offstage by the group’s former guitarist, Donnie Steele.

Slipknot kept rocking till 11 and reeling in those trying to leave early with favorites like Before. From start to finish, Slipknot was the show to see and left everyone in attendance satisfied after a long day of metal.

Not only is he a multi-media journalist, he is also an accomplished musician. He is the founder of SMI and drives the creative look, feel and branding for the publication. His years of writing, arranging, and performing live music in a variety of genres inform his ability to communicate the message and the mechanics of music. Roth’s work on SMI reflects his philosophy that music is the universal language, and builds community. He believes it has the power to unite people of every race, religion, gender, and persuasion.
Related ItemsAlina ShaninAnthraxMotorheadRockstar Energy Drink Mayhem FestivalRockstar Mayhem FestivalSeattle Music HappeningsSlipknotWhite River Amphitheatre
← Previous Story SMI Radio Ep. 65 On Demand: Carrie & Kristen Watt (Seattle Living Room Shows) and Carson Henley
Next Story → Music shines through clouds at Northwest LoveFest (Photo Slideshow)