By Alicia Kamenick on July 27, 2012@corianderstem 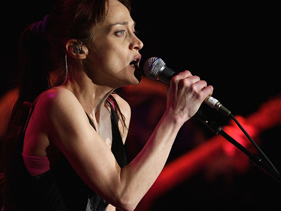 Seeing as how Fiona Apple has only released 4 albums over the past sixteen years, it’s not surprising that her fans get awfully excited when they get a chance to see her in person. Unfortunately, their unbridled enthusiasm got in the way of the music too many times during her show at The Paramount on Wednesday night.  Which was a shame, because it was an impressive performance that deserved better.

Her songs are full of dramatic pauses and quiet moments between lines of lyrics. Most of those moments were lost underneath cheers and cries of “We love you!”, “Whoo!” and even, at one moment toward the end, “Take down your hair!”

Ms. Apple has had more than her share of comparisons to that other singer-with-a-piano-in-the-mid-90s, Tori Amos, but the crowd was definitely reminiscent of the latter’s concerts, where fans would respond to every pearl of wisdom that left her lips (i.e., every other lyric in the song) with obnoxious, high-pitched shrieks. We get it.  You love this artist. Could you please just let a quiet moment be a quiet moment?

Apple and her band appeared unfazed by the additional shrieking accompaniment, but she did seem genuinely appreciative of the loud and enthusiastic welcome she received.  Aside from a few songs she performed at a grand piano, she was out in front of her band, dancing awkwardly with her arms clasped behind her back.  At times, she looked almost uncomfortable,  but then she’d slip into moments where she seemed completely lost in the music.

While her band (particularly guitarist Blake Mills) brought the songs to life, the real star of the show was Apple’s voice. Her vocal range itself is impressive (dig those high notes in Extraordinary Machine!), she performs great feats of dynamics in the songs. Within moments, she can take a lyric from velvety quiet to a pained and powerful roar.  The main set closer, Not About Love, was the show’s most breathtaking example.

Skipping the usual concert dance of the encore break with a funny little speech about it, she closed with a cover of the Conway Twitty song, It’s Only Make Believe, featuring a gorgeous slide guitar solo from Mills and a straightforward, lovely vocal.

Alicia is a Midwest transplant who loves Seattle but misses thunderstorms. Her musical obsessions began when her coolest aunt gave her a copy of K-Tel’s Rock 80 album for Christmas when she was 7. She spent many years studying piano and voice, but the force of rock and roll won, so while she still sings in a local chorale, her true musical passions lie more with The Beatles than with Beethoven. When she’s not working at her job in HR, she can be found singing bad pop songs at the top of her lungs … although sometimes she does that
Related ItemsAlica KamenickFiona AppleLive ReviewsSeattle Live MusicSeattle Music HappeningsThe Paramount
← Previous Story Capitol Hill Block Party 2012: Video Interview with The Grizzled Mighty
Next Story → Rewind Record Review: ‘Harvest’ By Neil Young