By Alicia Kamenick on August 9, 2012@corianderstem 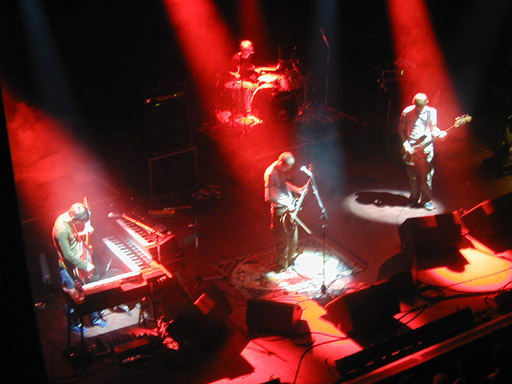 There’s a long list of adjectives that easily define Sigur Ros’ music: Ethereal. Orchestral. Majestic. Eerie. Otherwordly. Mesmerizing. Orgasmic. And they can all be used to describe last night’s show at The Paramount.

On a stage with eleven musicians (the core band members, plus three string players and three musicians on horns and a few woodwinds), the Icelandic band made creative use of unusual techniques: bowed guitar, bass played by tapping a drum stick against the strings, a bow dragged across the edge of a cymbal.  Singer Jonsi’s keening falsetto is a unique instrument itself, adding to the soundscape with his combination of wordless tones and made-up “Hopelandic” language.  During  Svefn-g-englar, he raised the guitar and sang directly into it, to great echoing effect.

Their music ranges from whisper-soft and sparse, to a wall of full, enormous sound, both often occurring within the same song. While the stunning crescendos (accompanied by some gentle head-banging in the crowd) were heart-stopping moments, they also know how to play with silence.

Viorar Vel Til Loftarasa featured a dramatic pause so wide the Boeing Dreamliner could have flown right through it. Disrupted only by one tentative “whoo” (followed by immediate shushing), a similar silence in a later song held nothing but silence for a breathtaking moment.

When the final song, Popplagio, reached its massive conclusion, it was almost overwhelming and I couldn’t choose between wanting to close my eyes and let the sound wash over me or to keep my eyes open so as not to miss a moment.  I wish I were at the Portland show tonight so I could have that feeling again.

Alicia is a Midwest transplant who loves Seattle but misses thunderstorms. Her musical obsessions began when her coolest aunt gave her a copy of K-Tel’s Rock 80 album for Christmas when she was 7. She spent many years studying piano and voice, but the force of rock and roll won, so while she still sings in a local chorale, her true musical passions lie more with The Beatles than with Beethoven. When she’s not working at her job in HR, she can be found singing bad pop songs at the top of her lungs … although sometimes she does that
Related ItemsAlicia KamenickLive ReviewSeattle Music HappeningsSigur RosThe Paramount
← Previous Story Seattle Living Room Show: Blake Noble, Impossible Bird & Luc and the Lovingtons (Photo Slide Show)
Next Story → Live Review: Franz Ferdinand gets Showbox jumping